However, since we’re not there often we wanted to pack as many highlights as possible. We ended up seeing Olympic NP, Mount Rainier, Glacier NP, Yellowstone NP, and then some random bits in getting to San Francisco. The distilleries we did visit were St. George in Alameda and High West in Park City.

Anyway, this sample was sent to me by someone, but I don’t have a clue who. Sorry.

Again, anyway, Dry Fly make a Wheat Whisky first and foremost. They also have other products including a bourbon, gin, vodka and a triticale whiskey. All interesting and the vodka and gin are not surprising, especially not for an American distillery. They all seem to be doing that for the initial cash flow.

At the time I tried this I didn’t know the ABV, and I didn’t really pick up on it either. 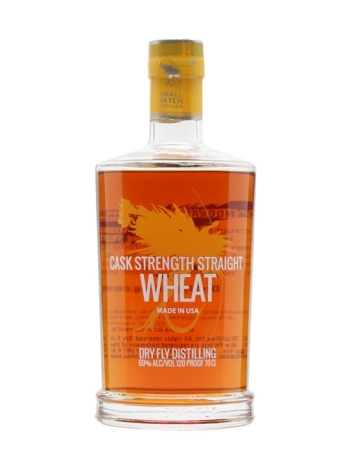 Sniff:
Mostly floral with a hint of alcohol. Ethanol, but also sawdust. Slightly drying with some fruity flavors of apple and star fruit.

Sip:
The palate is rather gentle and light, with some syrupy sweetness. The syrup tastes like the stuff you get with cans of fruit salad. Sugary, thick. There’s some spice and a woody dryness. Floral again too. Like a meadow, and not overly specific.

Swallow:
The finish is rather alcoholic. Sweet and sharp, dry and not very long.

It turns out the 60% does show more in flavor than in heat or burn. I guess this whiskey is rather young and the lack of depth shows that. The floral flavors are quite surprising and you don’t find them often in American whiskey, although of the big brand bourbons, I guess Four Roses sometimes has that.

EDIT: As it turns out, the particular whiskey I had doesn’t show on their website anymore and I had the Washington Wheat, which is 40%. It explains why I missed the burn of the high ABV. The flavor of alcohol is still there, obviously.

Anyway, a nice dram but I’m not a huge fan. As said, it lacks a bit of depth and the flavor of alcohol could benefit from a while longer in oak. But, as with the Woodinville, I’m very interested to find out where this is going. In a couple of years or so, I’d love to try again.

I'm very interested in booze, with a focus on whisky. I like to listen to loads of music and play lots of Magic: the Gathering, and board games too. I'm married to Anneke, have two daughters Ot and Cato, a son Moos and a cat called Kikker (which means Frog, in Dutch). I live in Krommenie, The Netherlands.
View all posts by Sjoerd de Haan-Kramer →
This entry was posted in - American Whiskey, - Wheat Whiskey, Dry Fly Distilling and tagged Dry Fly Distilling, USA, Washington, Wheat Whiskey. Bookmark the permalink.