This is one of the two remaining mezcals that I still needed to review from the last bottle-share. I’ve been working my way through the scraps of some of those I already reviewed for a while now and thought it was high time for getting these last two reviews out of the way.

How I got this bottle was a bit of a weird situation. I ordered the bottles for the second mezcal bottle share from a Dutch shop and on their site I found the Marca Negra Espadín and the Alacrán, of which the image also was a Marca Negra bottle. I couldn’t find any info on the second one in combination of the two names, but that has happened before if the product was fairly unknown, which mezcal is in The Netherlands.

I expected it to be some discontinued kind or so, but not a completely different brand. When the bottles arrived I was a bit disappointed so I emailed the shop. They allowed me to send it back and order something else instead, but after some asking around everybody was okay with just keeping the Alacrán, so I went with that.

Anyway, as far as I can (quickly) find out on the internet, Alacrán is a relatively new brand that’s trying to get some traction in The Netherlands with even a Dutch website. That’s not something that happens often for such small brands. They also have a tequila available which I have not tried.

The mezcal’s specifications are straight forward. No geographical indication, Agave Espadín, no wood maturation. The bottling strength is 46%, which is quite high for a regular mezcal. 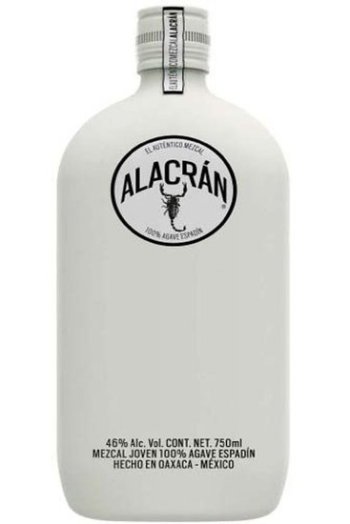 Sniff:
It’s pretty fierce on the nose, and quite green. Mostly herbs and moss, a touch of agave. The scent is quite dirty, which is what I expect from mezcal, normally. Some diesel and engine fumes, but also a strong hint of whipped cream. Herbs, oregano, pepper, sage.

Sip:
The palate is quite smooth after the nose with a light smokiness. It does build up to show some teeth after a while though. The agave is present but not too in your face, but this too gets stronger after a bit of time. Quite dry.

Swallow:
The finish is dry but not so dry as the palate. Herbaceous, with some leaves like the oregano and sage I got before. Tree bark, mossy. Pepper.

At first, when unpacking the box of this order I was a bit disappointed and did not have high expectations of this one. A spray-painted or dip-dyed bottle, screw cap, it looked a bit dirty. I was wrong.

The drink doesn’t show the complexity and refinement of the others I’ve had so far from both Leyenda and Del Maguey, but it sure is a tasty drink. It’s a bit of a bruiser compared to the other mezcals I’ve tried (including the yet to be reviewed Marca Negra which is a lot stronger).

The flavors are a tad simple, with no fruits as far as I can find, but they work well together. The smokiness is big enough to make an impact so you sure know it’s mezcal! Good stuff!

Alacrán Mezcal Joven, 46%, Agave Espadín. Available for € 46 at Slijterij Leiden (watch the prices, I’ve seen it in The Netherlands for almost € 60 as well)

I'm very interested in booze, with a focus on whisky. I like to listen to loads of music and play lots of Magic: the Gathering, and board games too. I'm married to Anneke, have two daughters Ot and Cato, a son Moos and a cat called Kikker (which means Frog, in Dutch). I live in Krommenie, The Netherlands.
View all posts by Sjoerd de Haan-Kramer →
This entry was posted in - Other Spirits, Alacrán and tagged Agave Espadín, Alacrán, Bottle Share, Joven, Mexico, Mezcal, Oaxaca. Bookmark the permalink.