Sometime in June Arran hosts their own little whisky festival with a lot of music there too. It almost seems like a miniature copy of the Islay Festival a couple of weeks earlier. As on the Feis Ile, as the Islay Festival is officially called, they also release a special bottling to celebrate the event.

This year it was this nine year old bottling, coming from a French Oak Barrique. What the label doesn’t say, but the folks of Arran on Twitter did, is that the previous contents were Calvados. Whether that would be red wine or apple brandy makes quite a difference.

Because of it being a Calvados cask, I knew I wanted it, since from the early days of Arran whiskies I really enjoyed that strong Calvados cask that came out back when they did dozens of cask finishes and such.

Anyway, someone in the UK was friendly enough to do the bottle share since shipping it to The Netherlands and then shipping samples back to the UK seemed a bit nonsensical. Unfortunately, it didn’t fill up and since I requested the share I felt I had to get 20cl. 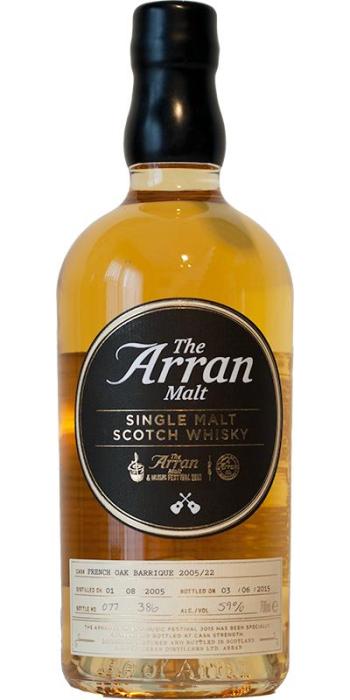 Sniff:
It’s rough and not much refined. Quite spirity, like the cask was very tired. The fruit distillate is noticeable. Some hint of apple scent, but it’s not very clear. It’s crisp and summery with hints of barley. Barely any sweetness, though.

Sip:
A strangely crude texture, a grainy mouth feel. Dry with old apple, some alcohol and white pepper. It’s quite green and hot. Young wit quite a lot of spirit coming through. Something crisp in the background.

Swallow:
The finish is consistent with the palate. Strong, warming with apple and barley. Some oak too.

This is a strange whisky. As in, when I tasted it I wasn’t thrilled with it. It’s okay, but there’s not too much going on. However, when writing these tasting notes into a blog post, I felt like trying it again.

Normally a good bit of spirit in a dram is something I enjoy, and since it’s all quite crisp and summery I should be happy with it too. However, I do still feel like the cask was very tired and didn’t impart as much flavor as at least I would have liked.

So, interesting and something worth trying, but I am glad I didn’t get an entire bottle.

I'm very interested in booze, with a focus on whisky. I like to listen to loads of music and play lots of Magic: the Gathering, and board games too. I'm married to Anneke, have two daughters Ot and Cato, a son Moos and a cat called Kikker (which means Frog, in Dutch). I live in Krommenie, The Netherlands.
View all posts by Sjoerd de Haan-Kramer →
This entry was posted in Arran and tagged 2005, Arran, Arran Festival of Malt and Music, Calvados cask, Cask Strength, Distillery Only, French oak barrique, Islands, Isle of Arran. Bookmark the permalink.