During a club tasting on a very sunny September afternoon we got to talking about wine casks and how they are generally quite crap. The host decided to give me a sample of a whisky that’s an exception to that rule which, apparently, all others present had already tasted at some point.

It turned out to be this 21 year old Craigellachie by Cadenhead, from their ‘Wood Range’. Interesting, since Craigellachie isn’t one of those distilleries that immediately comes to mind when buying something this random.

Like the Tomatin, this is a whisky that was finished in a wine cask, it being transferred in February of 2006. A nine year finish is not something to scoff at, but on the other hand it’s not a Cabernet Sauvignon so it might not be overpowered. Sauternes is used far more often for finishing that red wine casks, after all. 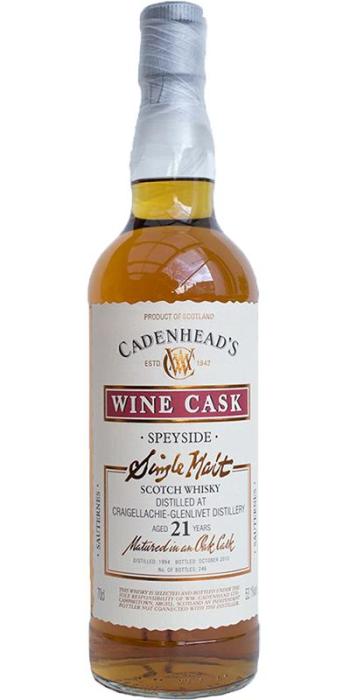 Sniff:
The nose of the whisky is heavy and rich right away. Quite sharp, and it doesn’t immediately indicate ‘wine’ to me. Big and cloying fruit flavors and some oak.

Sip:
The palate is sharp and rich. Fruity with hints of chocolate. Lots of alcohol, some pepper and oak. Stewed fruits.

Swallow:
The finish indicates the wine casks used most clearly with the fruitiness being a bit lighter and there being a slightly spicy edge. There’s some sharp alcohol edges, and it lasts quite long.

Well, point proven. This is a nice dram! There’s a good balance between the strong booze, the fruit from the wine cask and the oak itself. On the finish a bit of spiciness is added which only proves this further. It might indicate that I prefer Sauternes casks over Cab-Sauvignon casks, which doesn’t really surprise me.

I'm very interested in booze, with a focus on whisky. I like to listen to loads of music and play lots of Magic: the Gathering, and board games too. I'm married to Anneke, have two daughters Ot and Cato, a son Moos and a cat called Kikker (which means Frog, in Dutch). I live in Krommenie, The Netherlands.
View all posts by Sjoerd de Haan-Kramer →
This entry was posted in Craigellachie and tagged 1994, Cadenhead, Cask Strength, Craigellachie, Speyside, Wine casks, Wood Range. Bookmark the permalink.