The Old Pipe, a whisky shop that I don’t visit nearly enough, released some single cask bottlings through Claxton’s last year. I happened to get samples of both of them and decided that it was high time for a review of one of them.

This one is a 10 year old Ardmore, which is an interesting distillery. It’s a peated whisky from a region not well known for their peated whiskies. Also, I happen to have had some really good ones in the past, so let’s see where this one ends up.

What I find odd about this one, even before I begin tasting it, is that it was drawn from a Laphroaig cask. I don’t really see the point of maturing an already peated whisky in a Laphroaig cask, unless you want to add some of the coastal flavors from Islay, that are not usually present in Ardmore.

In a way that is understandable, but also, why would you want to get around so much of the distillery character by adding both sherry and coastal influences to a whisky that doesn’t necessarily have, or need that. 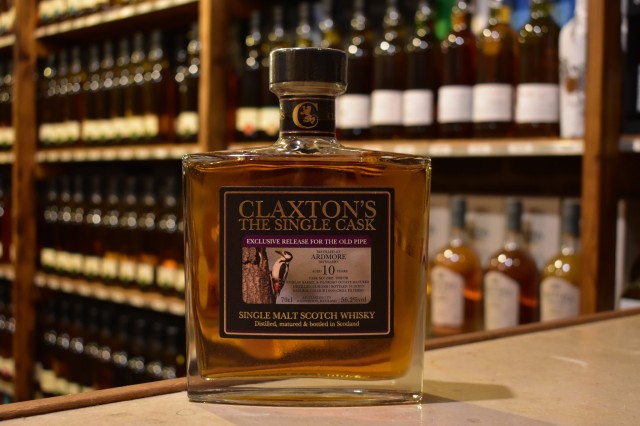 Image from The Old Pipe

Swallow:
The finish is dry and rather hot, but short. Some oak and smoke but not much else.

This is a bit of a confused whisky. I don’t really feel like I’ve been drinking Ardmore at all. It’s a tasty dram, but if I want a whisky that tastes like a sherried Islay whisky, I’d buy that and not a tinkered-with Ardmore.

So, it’s not bad, but I don’t really see the point.

I'm very interested in booze, with a focus on whisky. I like to listen to loads of music and play lots of Magic: the Gathering, and board games too. I'm married to Anneke, have two daughters Ot and Cato, a son Moos and a cat called Kikker (which means Frog, in Dutch). I live in Krommenie, The Netherlands.
View all posts by Sjoerd de Haan-Kramer →
This entry was posted in Ardmore and tagged 2008, Ardmore, Claxton's, Free Sample, Highlands, Sherry Cask, The Old Pipe. Bookmark the permalink.