The Diageo Special Releases are always a thing to look forward to as summer approaches. As in, that’s generally when the announcement happens or there is some marketing leak in which they releases are listed.

When it happened last year, I was pretty happy with there being a Talisker 15 on the list, because that suggested an sort-of affordable whisky in that list that is not Lagavulin 12. Of course, until then there were heaps of Caol Ila Unpeated releases, but that was the one who shined in absence last year.

Eventually, when the Special Releases were actually made available, it was autumn, and I got my bottle of Talisker in the mail. Luckily, I had some friends over for a drink that same night and the cork came of withing 4 hours of receiving the bottle. 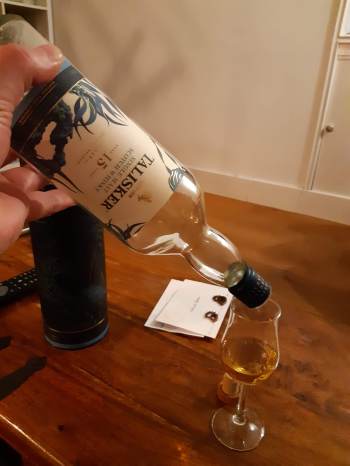 Sniff:
Herbal crispness, some cracked black pepper, dried grass, a whiff of smoke and some barley. There’s a very sweet scent behind it all, like moscatel with hints of vanilla.

Sip:
The palate is a bit more gentle compared to expectations based on ABV. More oak than on the nose, and more barley and grass notes. The sweet, moscatel note is smaller here than on the nose, luckily. Some orchard fruits like grapes, pears, but with the typical note of black pepper.

Swallow:
The finish has a bit of an after-burner with the alcohol leaving your mouth. More oaky, more coastal notes and a more prominent role for the peat than there was on the palate.

I think there are two clear sides to this whisky. First of all, it’s a real Talisker with enough black pepper, coastal hints and peat to not leave anybody wanting. Which is a good thing because there have been some shit Talisker releases the last decade.

On the other hand there is that weird sweetness on the nose, which carries on a bit on the palate. When I initially tried it, all three of us trying it pulled up our noses because of it. Another six months in a fairly empty bottle didn’t help, unfortunately.

So, summarizing, it’s a whisky that will not leave you very grumpy, but it also doesn’t really put a smile on your face. And at € 120 a pop, I expect there to be some happiness after a few sips.

Footnote: I’m glad they call these ‘special’ releases, instead of limited releases. There’s over 40,000 bottles of this stuff… I honestly didn’t know the outturn was this huge.

I'm very interested in booze, with a focus on whisky. I like to listen to loads of music and play lots of Magic: the Gathering, and board games too. I'm married to Anneke, have two daughters Ot and Cato, a son Moos and a cat called Kikker (which means Frog, in Dutch). I live in Krommenie, The Netherlands.
View all posts by Sjoerd de Haan-Kramer →
This entry was posted in - News and Announcements, Talisker and tagged Diageo, Diageo Special Releases, Islands, Skye, Talisker. Bookmark the permalink.