Otopoets is a car polish company in Hilversum, ran by the son(s) of Dick de Jong, who is one of my whisky friends. Every year he organizes a BYO tasting there for as many people as possible, all from the Usquebaugh Society. This year was the fourth event, and the first one I attended.

The idea is simple: Everyone brings one or two bottles of whisky they like to share with the rest and everybody can taste what they like. Since there were about 50 people, the amount of bottles came close to a hundred. Of course, I didn’t taste them all…

This year there was a little extra thrown in by the Society, since the new club bottling had to be picked before the tasting started. Everybody sat down and was given three cask samples of an undisclosed distillery. The first sample had some nice toffee and caramel notes but apart from that, not much happened. The second sample started on similar notes but developed a nice fruitiness which gave it a lot more complexity. The last sample was very alcoholic with some minor notes to compensate for that. It was (for me at least) the worst of the set. In the end the second sample was picked as the new club bottling and it turned out to be a 15 year old Cask Strength Glenfarclas, which will be bottled soon under the official privately selected Family Cask label by Glenfarclas. Goody!

Highland Park 11, First Cask, 59.4%
Very heavy on the nose, old wood, dried fruit, leather. The taste was warming and fruity with peach. The finish was a bit short but quite nice with candied fruit and fruitcake.

Tomatin 1984-2006, Daily Dram, 43%
Light and fruity, cereal on the nose. The taste is a little thin with some icing sugar and light fruit again. The finish offers yellow fruit, some vanilla and has a silky feel to it.

Lochside 1981-2000, Murray McDavid, 46%
Full frontal fruit, mostly soft tropical fruit like papaya and mango. The taste has yellow fruit is and quite creamy. ‘Creme patisserie’. The finish is a little sharp but again with a lot of fruit.

Dailuaine 1989-2007, The Ultimate, 46%
Lots of cereal, light and rather one dimensional. A little dry too. Not much happening.

Aultmore 16, 1990-2007, Dewar Rattray, 57.9%
Heavy sherry wood, wet casks, the whisky is suppressed a little bit. The taste offers more heavy whisky flavours with some grain, leather and oak influence. The finish is better with a little less sherry to dominate it all. 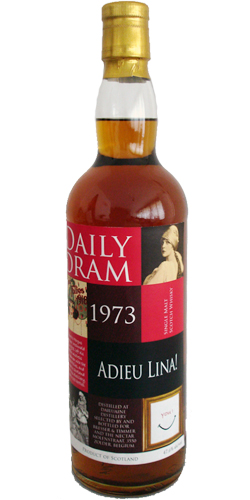 Dailuaine ‘Adieu Lina’ 1973, Daily Dram, 47.6%
Nice and fruity. It smells old with some mustiness to back up the fruit. The taste has a lot of old over ripe fruit as well, quite dry. The finish is another fruity explosion with papaya and melon.

Yamazaki Puncheon, 48%
Lighter than I expected from a Yamazaki. The typical Yamazaki complexity is there but not as pronounced as it can be. American oak influences with a little vanilla and some sweet citrusy notes. A little dull.

Glenfarclas 21, 43%
Light and creamy. A little thin with some fruit, a more modern whisky than some of the previous drams I tasted. The taste is somewhat more full bodied with sweet pastry. The finish has some light sherry wood influences, reine claude prunes and apricot.

Kavalan Solist, Sherry Cask, 58.7%
Pretty mature for such a young whisky (around 4 years old?) but some sharp edges to betray himself. Pepper, incredibly fierce with some serious alcohol bite to it. A lot of European oak and some fruit. The finish is more creamy with red fruit but rather short.

Kavalan Solist, Bourbon Cask, 58.2%
The nose is has some gluey notes and some coconut and lemon. The taste is full but not overly specific. The finish has some cloying sweetness that sets me off a bit.

Clynelish ‘Kleine Licht’ 11yo, 56.1%
Very fresh with crisp lemon, some bees wax on the nose. The taste has honey, heather, a little saltiness and also that Clynelish waxiness. The finish has a nice balance, but is not really long. Some fruit.

Wild Turkey 12, 50.5%
Overripe fruit and corn syrup first. The taste is pretty full with some alcohol, tobacco and other dried herbs. The finish is too much on the dried herbs with some vegemite flavours.

Bunnahabhain 27yo, 1978, Signatory Cask Strength, 55.6%
Spicy sherry, rather smooth for such an ABV, but also a little herb paste. The taste is more heavy with herbs and wood. The finish shows all the alcohol that’s in there.

Clynelish 14, Clydesdale, 60.4%
The nose is rather calm with a little waxiness. The taste has a serious amount of alcohol, also that waxiness, honey and pepper. The finish has way too much alcohol. A typical Robin Tucek choice?

Not all tasting notes are as good as I like them to be, but what do you expect with this many whiskies. The more elaborate notes were also the whiskies I deemed more interesting… It was nice to finally try some Kavalan’s of the well reviewed series. I nosed the standard edition last year and wasn’t too thrilled by it. The Adieu Lina and the Glenglassaugh Family Silver were the winners of the afternoon and evening!

I'm very interested in booze, with a focus on whisky. I like to listen to loads of music and play lots of Magic: the Gathering, and board games too. I'm married to Anneke, have two daughters Ot and Cato, a son Moos and a cat called Kikker (which means Frog, in Dutch). I live in Krommenie, The Netherlands.
View all posts by Sjoerd de Haan-Kramer →
This entry was posted in - News and Announcements. Bookmark the permalink.