In the recent #LoveFirstFill Twitter Tasting from Morrison Bowmore Distillers the final two samples were the latest batches of Bowmore Tempest. The Bowmore Tempest is a relatively new series from the Islay distillery that was first launched in 2010. Since then they’ve released a new batch annually, being up to batch four now. I bought a bottle of the first one at the distillery from the Feis Isle series. This was a limited version of the first batch with some metal thingy around the neck of the bottle. Of course, with my scheme to reduce the amount of open bottles in my collection this one hasn’t been opened yet but I know it’s a very tasty dram. I knew that of this one too since we gave a bottle of it to my brother in law for his birthday last January 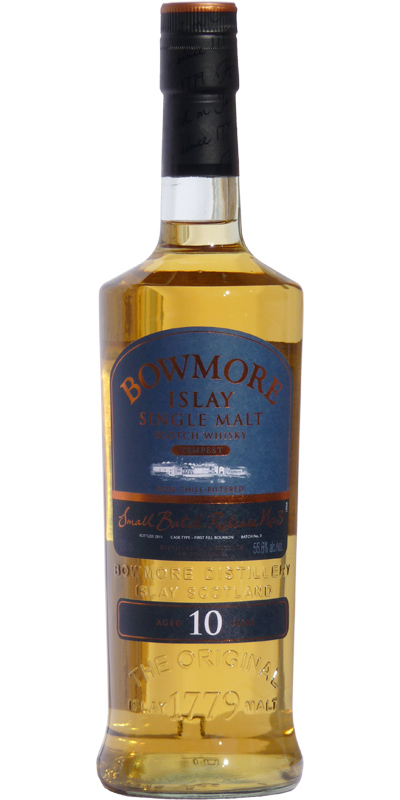 Sniff:
You notice right away that this is a complex dram.  There’s hints of malted barley, straw, smoke, lemon, leather. It’s a bit spirity in the way I like it. Crisp and fresh, but more in the style of Bowmore that they had before. A long time ago before the hideous FWP era. There’s a bit of ‘reek’ in it that only Bowmore can pull of and it’s damn nice. Some brine and peat, with a touch of juniper too. So a jenever-like hint is present. In a good way. Islay in a glass.

Sip:
The palate continues in this manner of complexity with a little bit of a sweeter touch. Slightly smoky with leather wax coats, kippers, pepper. I also get creosote and tar, with peat, iodine. Like standing in Bowmore’s harbour with some fishing boats there. There are some notes of a diesel fire on a peat bog, if I may get lyrical.

Swallow:
The finish has that leather, diesel, tar, iodine, rope, vanilla, lemon, salt, pepper thing again. So all flavours come back for a last goodbye.

This, my friends, is a damn fine dram. There’s a lot of stuff going on, it has some good strength behind it and it does exactly what you want a Bowmore to do. The Bowmore stench that I only know from 1960’s Bowmore is coming back to the distillery’s product and I really enjoy that. This bottle is available at the better liquor shops and shouldn’t set you back more than € 45 to € 55. That means that apart from friggin’ delicious, it’s also very affordable. Good stuff! I really want a bottle of this (or two).

I'm very interested in booze, with a focus on whisky. I like to listen to loads of music and play lots of Magic: the Gathering, and board games too. I'm married to Anneke, have two daughters Ot and Cato, a son Moos and a cat called Kikker (which means Frog, in Dutch). I live in Krommenie, The Netherlands.
View all posts by Sjoerd de Haan-Kramer →
This entry was posted in Bowmore and tagged Bowmore, Love First Fill, Morrisson Bowmore, Tempest. Bookmark the permalink.