This was my very first Karuizawa. I don’t remember how I got to a point that I knew about the distillery and wanted their product, but I do know ordering this by phone from liquor shop ‘De Snor’ in Brunssum. Never been there, never bought anything since. I guess it was a bit of a freak delivery that they stocked this all of a sudden. Especially since this was bottled for the Taiwanese market.

The Japanese Wine Cask is something I did not know back when I ordered it, else I might have been a bit more skeptical. I even read somewhere that it was a Japanese Merlot cask, but I’m not sure about that.

Of course, Karuizawa is closed with prices ramping up quickly. This, back in the day set me back about € 85 or so, and according to Whiskybase it is worth about € 100 now. That is based on the last shop that sold it, to their knowledge. I know that if I put my second bottle up for auction, I’d get at least twice that. 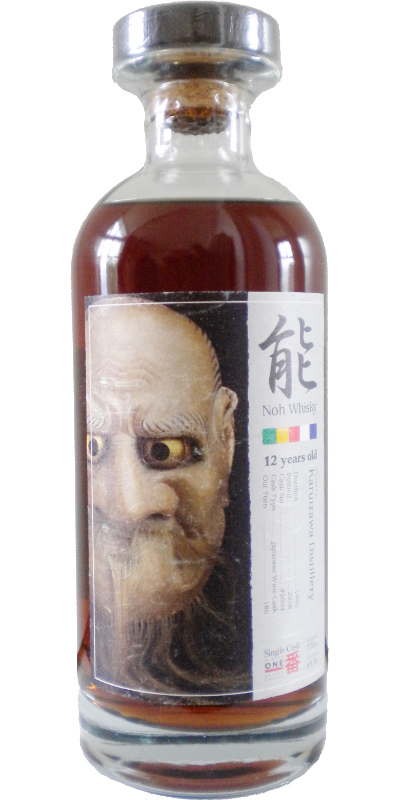 Sniff:
There’s a lot of oak, but that’s not uncommon in Japanese whisky. There’s quite some wine influence too, but already veering towards sherry and oak. Not like many other wine maturations I’ve tried. Thick, syrupy with prunes, dates and figs. Some chocolate too.

Sip:
It’s very sharp, even with this bottle being open for almost six years. Bitter and sweet, but mostly bitter. Cherry wood, sour cherries. It doesn’t mellow at all. Cocoa and coffee too.

Swallow:
The finish is rich with the fruit and chocolate continuing here too. Wine, sherry, old oak, maybe even a bit of rotten wood. Very earthy and long.

While this is a weird whisky to say the least, it’s very very good. It’s ridiculously oaky for a 12 year old, and the wine maturation does strange things too. It’s all very mature, but also very youthful since it’s scorching sharpness.

Great stuff though. I really enjoyed my bottle and I guess on Friday, at the Bottoms Up this will go down nicely too. If you find a bottle, and it’s fairly priced, get it.

I'm very interested in booze, with a focus on whisky. I like to listen to loads of music and play lots of Magic: the Gathering, and board games too. I'm married to Anneke, have two daughters Ot and Cato, a son Moos and a cat called Kikker (which means Frog, in Dutch). I live in Krommenie, The Netherlands.
View all posts by Sjoerd de Haan-Kramer →
This entry was posted in - Japanese Whisky, Karuizawa and tagged Japan, Japanese Wine Cask, Kamiasobi, Karuizawa, Noh. Bookmark the permalink.