I’ve long been a sucker for Brewdog’s beers. Lately it’s been on the back burner a little bit since I find that they’ve gone a bit awry with their pricing. Most ‘one off’ beers that I would like to try were so prohibitively expensive that I just couldn’t bring myself to order them.

Also, I think they’ve done enough experimenting. Well, that’s not entirely true. I like experiments, I like variations of a familiar theme. However, when you start doing Imperial Weizenbock lagered on whisky casks, or hopping the hell out of Belgian style triple your either brilliant (I didn’t like the beers, so not entirely sure on this) or grasping for anything that you haven’t done before (and sometimes with good reason).

Now, not all is negative. Some of my favorite beers are still from Brewdog. I haven’t had an IPA that topped Punk IPA. Also, when I’m indulging on a beer, I more or less end up buying a Tokyo* every time. And then IF there is a brewery I’m willing to spend more than a couple of euros on a bottle on, it’s Brewdog (or Westvleteren, but that’s another story all together).

Now, Russian Doll. They did IPA is Dead before (different hops to the same beer) and they did a batch of Unleash the Yeast (same beer, different yeast strains). Now there’s Russian Doll. The same beer brewed to different strengths. They increase in strength, which more or less is the same as ‘they increased the malt used to brew the beer’. This results in a Pale Ale, and IPA, a Double IPA and a Barleywine.

This is where I had some alarm bells ringing, since Barleywine and IPA are generally not in the same flavor group. Brewdog informs us that they also adjusted the hops contents to suit the different styles. 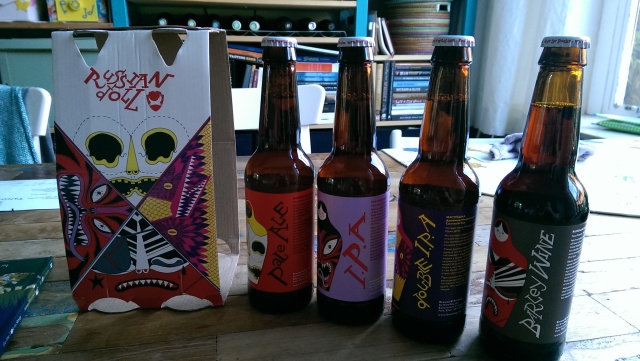 Pale Ale
More hoppy than I expected, with a noticeable quantity of barley used. Not overly complex but the flavors do come off as ‘green’. Very herbal with barley and hops in this way.

IPA
The IPA is the more hoppy and slightly stronger variety. The strength isn’t overly revealing but the hops are on overdrive. It’s gentle but very crisp. The green theme is here too. The hops push back the barley flavors a little bit.

Double IPA
I don’t like Double IPAs. They fall outside the IPA category and are not ballsy enough for Barleywine or Quadruple style beers. I always feel like they want to be two things at once and I’ve never tried one that I really wanted to go back for. Some are okay, but most are just not interesting. This one falls in that category. Okay but not interesting. It’s holding the middle ground between the IPA and the Barleywine.

Lots of barley, and quite some hops too. The barley is gaining ground though. Fairly strong but not a belter at that either. The crispness is gone and it’s slightly cloying. 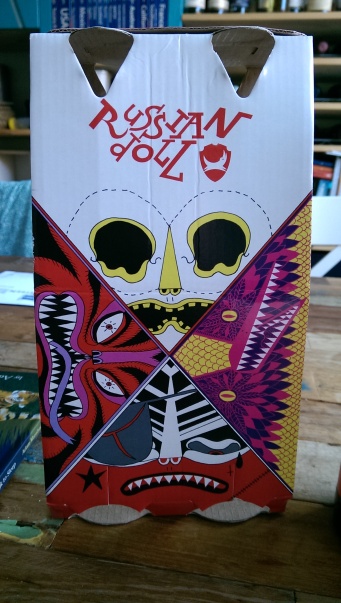 Barleywine
Now this is a rather big beer. The weight of it is considerably bigger than it was in the previous brews. The flavors too, with the hops being turned down and the malts up this is a totally different beer than all others.

The barleywine has flavors of a mountain of malt. It’s sugary and rich with even bay leaf and beef stew.

While I like the intention of the project, I think they should’ve excluded the Barleywine, or choisen a different kind of beer. The way it’s hopped is so vastly different than the other three brews it just doesn’t make sense anymore.

The first three are rather consistent with increasing levels of richness and alcohol. The style of the beer changes significantly if you double the malt, apparently. I wasn’t overly convinced with the Pale Ale and the India Pale Ale, but the Double corrects the experiment.

The beers are nice, but none are exactly ‘new’. Also, I don’t think I’ll remember them that long either. The best of the bunch is the Barleywine I think. That one displayed the most interesting flavors with the stew thingy going on. Rather herbal, and rich. Lovely stuff, that!

You can get this pack at the better beer shops, like Drinks & Gifts in Krommenie. It’ll set you back some € 14.50.

I'm very interested in booze, with a focus on whisky. I like to listen to loads of music and play lots of Magic: the Gathering, and board games too. I'm married to Anneke, have two daughters Ot and Cato, a son Moos and a cat called Kikker (which means Frog, in Dutch). I live in Krommenie, The Netherlands.
View all posts by Sjoerd de Haan-Kramer →
This entry was posted in - Beer and tagged Barleywine, Beer, Brewdog, Double, India Pale Ale, IPA, Pale Ale, Russian Doll. Bookmark the permalink.