Well, yesterday nipped me in the but. I didn’t slide down too much, but I think I should have guessed that one right. As in, I already tried that dram twice and at both occasions I ‘assessed’ it. So, again, that should have been me on that 100 points list too.

Bummer, though. Trying again today. I’m loving this year’s edition. Maybe most of all so far. Of course, we’re not even half way so the truly screwed up picks by Ewald and Leon can still happen, but so far there have been many rather current releases and I think that’s more than tough enough.

Sniff:
Quite some rich and strong spirit character remaining in this one. Heavy on the nose with some thick sweetness without it being cloying. Vanilla, sweet melon and lychee. I don’t get too much burn from the alcohol, but it’s not low either. Some oak in the background with a touch of new-oak going on? So far, I like it! 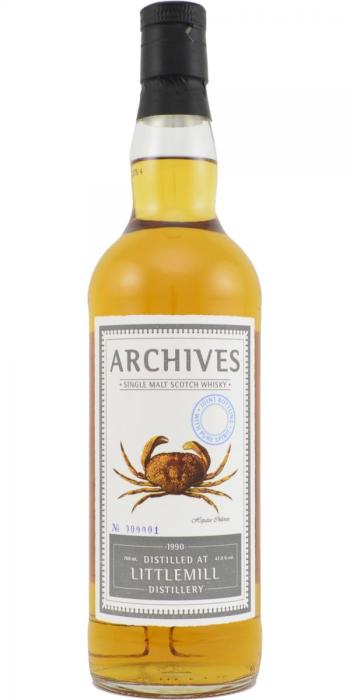 Sip:
The palate is surprisingly fruity, the lychees and melon but also some dark fruits in the form of cherries and black berries. The vanilla is rich here too, and the oak build gradually but is unmistakable after a couple of seconds.

Swallow:
The finish is very much like the palate with more vanilla and oak. The fruit is still here too but it slides to the background a little bit.

I love this dram. Maybe not as much as yesterday’s, but I love it. Although the flavors aren’t overly sherry-like, the richness and complexity remind me of a Macallan for The Darkness! by Master of Malt/Maverick Drinks they let me try.

About that richness: It is HUGE. While this dram doesn’t have an impact like yesterday’s, it is so incredibly rich that the flavors cannot be gotten around. Very strange, very intriguing, and very delicious. Good pick! Only 17 minutes to reveal!

And the fall starts. 0 points. It turns out to be Whiskybase’s own Littlemill with the Crabs label. It might have something to do with me having absolutely no experience with Littlemill. The last one I properly tried was the first of the Archives label in the Blind Tasting Competition. I was way off on age, ABV and region even. Interesting though. A good dram, and I should pay more attention to all the Littlemill releases that have been coming from everywhere. There’s something to it, apparently!

I'm very interested in booze, with a focus on whisky. I like to listen to loads of music and play lots of Magic: the Gathering, and board games too. I'm married to Anneke, have two daughters Ot and Cato, a son Moos and a cat called Kikker (which means Frog, in Dutch). I live in Krommenie, The Netherlands.
View all posts by Sjoerd de Haan-Kramer →
This entry was posted in Littlemill and tagged Archives, Blind Tasting Competition, Littlemill, Lowlands, Macallan, Usquebaugh Society, Whiskybase. Bookmark the permalink.