Right. A pink salmon, with insects for fins or so. Weird.

Anyway, to get this out of the way: I don’t like Ledaig. It displays flavors that I don’t find interesting. It has a weird smokiness that is strangely clean, and apart from that I generally get a lot (too much) of cask influence.

And before you start throwing great Ledaig references to me: No, I haven’t tried those 1973 ones. Prove me wrong and send me a sample.

Having said that, it does make for a recognizable whisky which gets me some points in the Blind Tasting Competition every year. So there’s that. But still, I’ve never come across one that I wish I bought a bottle of.

The limited enthusiasm for Ledaig is shared by others too, I expect, since this is the only Liquid Art bottling of which there are still quite a few available. 41 according to their site.

Let’s see where this one comes in. 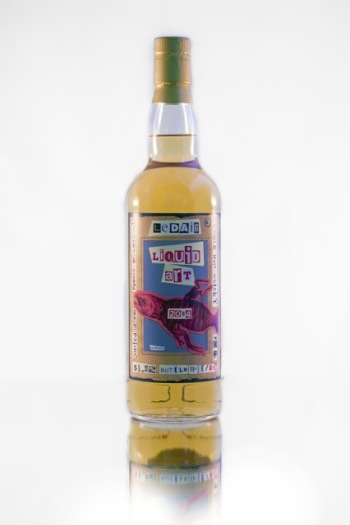 Sniff:
I get fresh leaves, a rainy forest with snapped twigs, bushes and such. There’s a lot of smoke and quite a bit of saltiness too. It’s quite sharp but there’s also vanilla and a hint of espresso, or maybe just coffee beans. Minerals and slate too.

Sip:
The palate is dusty and chalky with oak, smoke and minerals. The slate is here too. Quite austere. Some vanilla, but not as much as on the nose, and a hint of caramel, salt and coffee again.

Swallow:
The finish is somewhat more gentle and less austere. Less demanding. The smoke and salt and vanilla are still here, so it’s very consistent too. Oak, leaves and twigs.

Well, this is pretty okay for a Ledaig. It’s likable and has somewhat more complexity than I’m used to in those young ones. It’s that austerity, with the huge smoke and minerals that don’t sit well with me. Ardbeg shows a similar profile, often, but less clean and somehow more to my liking.

The foresty flavors are nice, but are strange in combination with the salt, which makes you think more of a sea side dram than anything else. That does, I must say, fit Tobermory well. There’s quite some trees behind the village, from the pictures I’ve seen, and it’s a harbor.

So, summarizing, the quality of this dram is high. I think I like this better than I expected and better than most Ledaigs I’ve tasted the last couple of years. But still, my least favorite dram of the range so far.

Thanks to Serge R. for the sample!

I'm very interested in booze, with a focus on whisky. I like to listen to loads of music and play lots of Magic: the Gathering, and board games too. I'm married to Anneke, have two daughters Ot and Cato, a son Moos and a cat called Kikker (which means Frog, in Dutch). I live in Krommenie, The Netherlands.
View all posts by Sjoerd de Haan-Kramer →
This entry was posted in Ledaig and tagged 2004, Free Sample, Islands, Isle of Mull, Ledaig, Liquid Art, Tobermory. Bookmark the permalink.