As part of a deal for a bottle I recently sold I could come over the guy who bought it and pick some samples. He’s very focused on Japanese whisky and therefore has some contacts in the land of the rising sun. He just got in this Limited Edition Yamazaki, this year’s edition which is bound to go the way of most Japanese whiskies and sky rocket soon.

However, I got a sample and I get to review it. Quite early as I haven’t seen any posts of it yet, although I don’t follow a lot of blogs myself. (Not many, just 50 or so…)

It’s bottled at 43% and made up of young bourbon barrels and older (up to 20+ years, according to the press release) sherry casks. Obviously it’s already sold out and if I remember correctly from the talk BP and I had about it yesterday it’s already doubled in price.

Yamazaki generally is very good, although the 2013 whisky of the year from Murray’s Bible was only so-so in my book. Worth a hundred bucks, and CERTAINLY not the 1300 euros it finally went for at its peak. But then again, that’s what hypes are for, right? 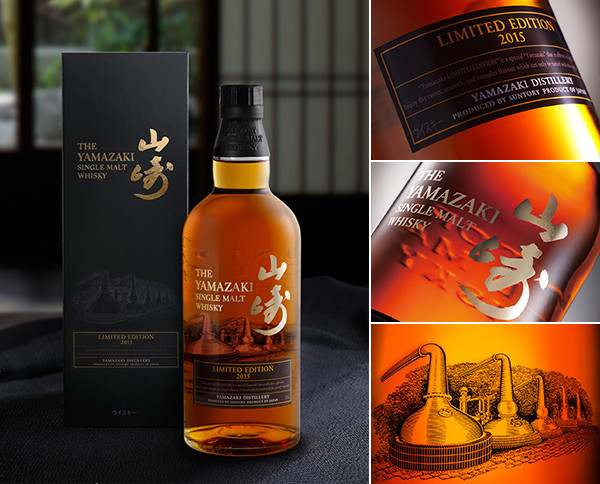 Sniff:
Timid and malty at first. There’s some oaky spices and a hint of apple. Sweeter fruits follow that, melon and unripe banana. Some nutmeg and tree bark. The sherry is very faint with just some dark spices coming through. Also a touch bitter.

Sip:
The palate is not overly rich at first, but has a very nice and interesting flavor of cassis, cherries and some almonds. The oak is kept in check and it takes a few seconds for some bitterness and oomph to come through. It’s slightly biting after that, with some sharp spices. Not quite peppery. The melon is present again (rock melon, I’d say). Some licorice. It gets richer after some seconds, which helps.

Swallow:
The finish is complex with many flavors. All I got before hit right at the same time and the sweetness and light bitterness of the oak and spices fight for the first spot. Neither wins. The sweetness lasts longest, although the bitterness is never gone. Wood influence at its finest.

This is a gorgeous dram. It’s not punch-packing like some other Yamazaki releases and therefore lacks some intensity, but it’s more a refined dram than I expected. The sweet fruits and the bitter spices combine very well and I think that’s where the sherry cask and bourbon cask blends work best.

The only thing I’ve not found here is that typical ‘Japanese-ness’. This could just as well be a Balvenie or some other very carefully and very well blended scotch. But, that’s not really a complaint when the whisky is this good. And it is. It is gorgeous.

I'm very interested in booze, with a focus on whisky. I like to listen to loads of music and play lots of Magic: the Gathering, and board games too. I'm married to Anneke, have two daughters Ot and Cato, a son Moos and a cat called Kikker (which means Frog, in Dutch). I live in Krommenie, The Netherlands.
View all posts by Sjoerd de Haan-Kramer →
This entry was posted in - Japanese Whisky, Yamazaki and tagged Japan, Japanese Whisky, Limited Edition, NAS, Yamazaki. Bookmark the permalink.