So, Maltstock is over for another year. This weekend was riddled with beer and whisky from about 2pm on Friday, to 2am on Sunday morning/Saturday night. I wisely kept off the booze the rest of Sunday.

I was allotted three masterclasses: Douglas Laing, William Grant and Sons, and finally Mars Whisky. In the end I had way more whisky than expected in semi official setup, since Saturday morning’s ‘detox walk’ ended up being a ‘retox walk’ instead (thanks to Highland Park). Also, I ended up going to Billy Abbott’s masterclass for The Whisky Exchange too, since my buddy TT wasn’t feeling up to it. And there was the midnight campfire with a bunch of Highland Park whiskies again.

I’ll start the write up with some general comments and reflections of Friday. Saturday will follow tomorrow. I’ve not yet decided whether or not to do a full write up of the masterclasses since I might also do that in De Kiln (our club magazine).

Anyway, Friday was an early riser for the Maltstock trip. I picked up TT and Gal Granov (of Whisky Israel fame). Of course, Gal’s luggage was delayed before it hit the belt. Then we waited for one of his friends who rented a car. Things went slowly so far.

After getting about an hour and a half delay in hitting the road we drove to Sint Oedenrode to visit The Old Pipe. One of my favorite whisky shops when I still lived in Den Bosch. I hadn’t been there for five years or so and by visiting it again I realized I should get that one on the regular list again. 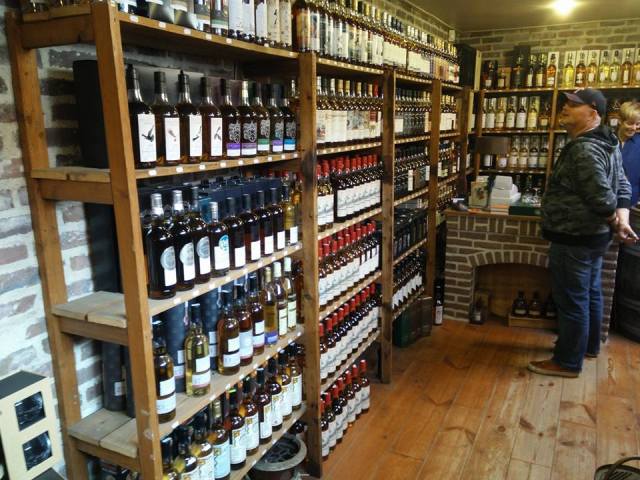 About 10% of what’s available

The shop is awesome. Booze-boner awesome. They have everything they can get from Adelphi, they have boat loads of The Whisky Agency, Ultimate, Creative Whisky Company and many, many others. Also a lot of older stuff that’s just a big surprise that it’s still out there.

Of course, I went in with every intention of not buying anything, but in a little speck of heaven that’s just impossible. I got a bottle of Willett 2yo (their own distillate) and a Ledaig 18. I also set up an upcoming bottle share of Willett whiskey (2x 2yo, 4yo, 8yo and XCF, keep an eye on Facebook). My buddies bought some stuff as well, of course.

After that it was time for pancakes next to the Maltstock venue. We met up with loads of usual suspects and some new folks too. Double bacon pancakes and Westmalle Dubbel for the win!

Maltstock opened at four. We went in, dropped off our bags and put our contribution for the sharing table out on, well, the sharing table. Then we had some drams while shaking hands with folks we hadn’t seen in ages. It was good. I didn’t even try to take pictures of what I had. I also don’t remember.

In between pizzas it was time for Jan Beckers’ masterclass for Douglas Laing (more on that soon). When the Maltstock folks emailed that there would a pizza and a half for each, I thought they had seriously overestimated our guts. They didn’t. That stuff filled like paper, after this much booze.

At night it was time for the whisky quiz in which I didn’t do particularly well. No prize this time, but it was good fun and I got to meet some new people again. I hung around with Kevin Abrook from William Grants and Sons, who would be hosting the masterclass the next day. Also a couple of Germans I didn’t know (David and Isabella). We had gin tonics. We shouldn’t have.

I think I tucked in just before 2am. I was getting drunk and I didn’t want to ruin the Saturday so I stopped just in time.

In short: It was awesome. I had great booze. I met great folks.

I'm very interested in booze, with a focus on whisky. I like to listen to loads of music and play lots of Magic: the Gathering, and board games too. I'm married to Anneke, have two daughters Ot and Cato, a son Moos and a cat called Kikker (which means Frog, in Dutch). I live in Krommenie, The Netherlands.
View all posts by Sjoerd de Haan-Kramer →
This entry was posted in - Festival and tagged Maltstock, The Old Pipe, Whisky Israel. Bookmark the permalink.