Whiskybase made it a thing to release a new whisky under their own label at every 10k mark in their database. The 70,000th whisky was added a while ago and this whisky was bottled to celebrate that.

What’s even better is that those whiskies generally are really decently priced. This 43 year old Invergordon was ‘only’ € 145, but in the current market that is a really, really good price for such an old whisky, even if it’s a grain whisky.

Obviously it sold out in an hour or so and the email newsletter that announced it wasn’t even on time to announce it, actually. Luckily, I just happened to be Facebooking at the moment and saw their post on it. I ordered two right away, and since I’ve been overspending for a while again, I decided to share both of them. They filled up quickly. 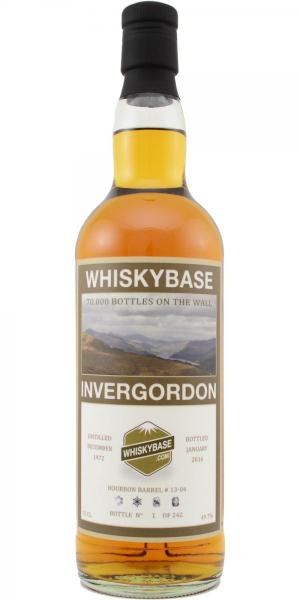 Sniff:
The nose is crisp and sweet with lots of barley and pastry goodness. That this is a grain whisky is very, very clear. Lots of oak, some basil, banana and it doesn’t go the Armagnac route. Slightly vinegar like but with fresh peaches and orange. Mint, and overripe tropical fruits.

Sip:
The palate is slightly drying but quite sharp and full. Sweet, with lots of barley and pastry again. Some honey sweetness too. Oak, banana, peach, orange, nectarine. Subtropical fruits galore!

Swallow:
The crispness of the nose makes a comeback, and the finish is long, fruity and sweet. Some green oak and green barley is present suddenly. When it starts fading it’s gone fast.

This is a typical grain whisky. The flavors are fairly simple but there’s a lot of them. There’s not much depth, and not much layeredness. However, the fruits and barley flavors are awesome. It’s much better than I expected, and it’s not just all oak.

The guys at Whiskybase really picked a good one this time around. Apparently there are a couple more being bottled by Whiskybroker (where this one comes from too) and I can only imagine how these compare. But, since it’s grain whisky they will compare quite well.

I'm very interested in booze, with a focus on whisky. I like to listen to loads of music and play lots of Magic: the Gathering, and board games too. I'm married to Anneke, have two daughters Ot and Cato, a son Moos and a cat called Kikker (which means Frog, in Dutch). I live in Krommenie, The Netherlands.
View all posts by Sjoerd de Haan-Kramer →
This entry was posted in - Grain Whisky, Invergordon and tagged 1972, Bourbon Barrel, Grain Whisky, Invergordon, Whiskybase. Bookmark the permalink.