This, like last week’s Ladyburn, is a sample I got from Kevin Abrook during his Masterclass at Maltstock. Ailsa Bay is the newest malt whisky distillery in the William Grant & Sons company.

Ailsa Bay is built up as part of the Girvan complex, and was created to supply malt whisky for their Grant’s blended Scotch. I don’t think they initially planned to focus on it as a single malt whisky, but the first official expression was released a little while ago.

Mr. Abrook already brought us a sample of it in September so we could try it early. It might have changed slightly over the months before the official release, but the style should be very, very similar. 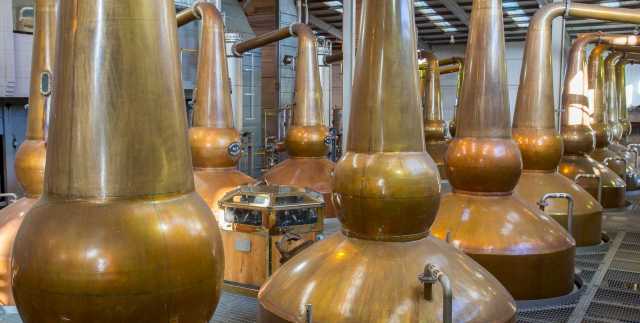 What’s interesting about Ailsa Bay is that they can make a lot of different spirits because of their setup. The styles are estery, nutty, fruity and heavily peated. This one is of the last kind.

This fact also makes it a very atypical Lowlands distillery since the regional style that has developed over the years is nowhere to be found. The aim of the distillery was to replace The Balvenie as part of their blends, since that distillery is becoming so popular for single malt purposes. The still have the shame shape as the ones in Dufftown.

Image from The Green Welly Stop

Sniff:
Smoke and peat, bigtime. Spirity too with some light spices. Quite sharp with some custard and ashes.

Sip:
The palate is sharp and some power to it. More than 48.9% made me expect. Quite hot with the alcohol. Smoke is actually the only flavor I’m getting. A tiny touch of barley, some oak. Very simple.

Swallow:
The finish shows a bit more depth and to the hints of smoke a whiff of diesel is added. Somehow it reminds me of Mezcal. Short and sharp.

This might not seem much of a review. However, I tried getting everything from the sample I could. There’s just not much there. I think the whisky does have potential but needs some more time in oak before it becomes a lot more interesting. Which it can.

The flavors show mostly smoke and the smoke is covering a lot of other things up. It’s not as refined or ingrained in the liquid as similarly aged Islay whiskies can be.

So, an interesting look into what they’re doing at Ailsa Bay and since it’s available for £ 51 I think it’s a nice and affordable way to get to know a distillery. What I hope they will do is release a similarly aged and similarly matured set of all four styles so we can compare the estery, fruity, nutty and heavily peated ones side by side. Now that would be awesome!

I'm very interested in booze, with a focus on whisky. I like to listen to loads of music and play lots of Magic: the Gathering, and board games too. I'm married to Anneke, have two daughters Ot and Cato, a son Moos and a cat called Kikker (which means Frog, in Dutch). I live in Krommenie, The Netherlands.
View all posts by Sjoerd de Haan-Kramer →
This entry was posted in Ailsa Bay and tagged Ailsa Bay, Girvan, Lowlands, NAS, William Grant & Sons. Bookmark the permalink.