This month can only be summarized by superlatives like ‘Ridiculous’, ‘Decadent’ and ‘Superfluous’. What made this month like that was a trip to a brewery, having a few nice beers with my mate Jason, and Wouter in Amsterdam, a camping trip with my in-laws and a last minute trip to Borefts Beer Festival by Brouwerij De Molen.

If something is organized by an epic brewery like De Molen, you know you’re in for a treat and my first ever trip to Borefts sure lived up to expectations. Below is a list of things tried over the last month.

The total count went over 60 different beers, but some were not had for the first time so I’ll skip those. Especially if they’ve already been on one of my monthly lists.

Framboos & Framblij – Brouwerij De Molen
A fun and fruity raspberry beer. I believe a lot of people didn’t like this one in particular but I thought it quite good. Not the best of the evening, but quite nice.

Wild West Blackthorn Edition 2015 – Brouwerij Alvinne
This nicely herbal sour beer is infused with Blackthorn and while I cannot say whether or not you actually taste that, it sure was a tasty beer!

Kriek van Mortagne – Brouwerij Alvinne
Nice and a fair level of cherry flavor. Not totally overpowered by the fruit though.

Top of the Morning – Brouwerij Kees
An oatmeal coffee stout. A breakfast beer if there ever was one, based on regular breakfast items. Quite good!

Ghost Town – Bakunin Brewing Co.
A slightly acidic porter style beer with some coffee flavors. This is an absolutely lovely beer. Glad to have found it at the festival.

Sverd i Fjell – Lervig
A triple IPA. Big flavors and an ABV that’s out of this world for an IPA. Lovely though

Iconoclast Quad – Lervig
Brett acidity but with the full malty flavor of a quadrupel. One of my favorite beers of the evening, and for a change it’s sort of affordable.

Kriek Ale 2015 – Cascade Brewing Company
A brewery from Oregon making really, really expensive fruit beers (think of almost 40 euros for a 75cl bottle). I was curious, and I was not let down. Big fruity flavors, a great sour backbone. An absolutely stunning brew.

Strawberry 2015 – Cascade Brewing Company
Slightly less stunning than the Kriek, since the strawberries and vanilla beans add a sweetness that I can do without. Still an almost-five-star beer, this.

Others from the festival that I was less impressed with. Still, almost all of them were very good:

Barrel Project #04/2016 – Brouwerij Kees
As with most of the Barrel Projects from Brouwerij Kees, I’m not a huge fan. They’re not bad beers, and I love the fact that he’s experimenting, but it just lacks a bit of depth and complexity to keep me occupied. So far, I prefer his IPAs and some others I’ve tried.

3 Bean Stout – Lervig
I bought a couple of these based on some recommendations for Borefts Beer Fest, where they served the barrel aged version. Unfortunately they ran out right in front of me and only 20cl more would have given me a glass of it.
The regular one though, is an epic beer in its own right. The tonka beans really add a unique flavor that I’ve not had in any other beer to date. It’s inspired. The base stout is huge and big flavored, and the use of vanilla and cocoa beans add some depth. Then this all is covered in a big, fat layer of tonka bean weirdness. Epic, epic stuff.

Guinness Draught – Guinness
Not much to say apart from a bottle of ‘Guinness Draught’ (not a clue how that works) is not as bad as I remembered it. It used to be my go-to pub beer, but that’s been some years. This was in a steak house that assured me they served “Beers” (with capital B), but apart from 7 different styles of Heineken and Amstel lager, they only had this and Palm, which are all worse options.

West Indies Porter – Guinness
Guinness showing off that they can do great and far more impressive beers too. Recommended to try at least once, to compare to regular Guinness.

WhenFearsBecomePhobias – White Pony Microbrewery
A Calvados barrel aged beer from the Italian microbrewery. I thought this a huge let down and far less impressive than their ‘S… than ever’ Calvados BA beer (more on that in little under a month).

GROM – Brouwerij Bliksem
Another not so impressive beer, unless you really like liquorice flavors, and bay leaf. Not bad, but just so-so. Luckily, I think it wasn’t overly expensive.

Sunturnbrew 2014 – Nogne O
This might have been my first proper experience with Nogne O (actually with lines through the O’s but I can’t find the right key to do that). A big smoked porter, which just happened to be right up my alley. Tried again a week or two ago and again, I was very impressed. Recommended

Kompaan 39 Bloedbroeder – Brouwerij Kompaan
A big, heavy Imperial Stout infused with port wine. The port made it quite a bit sweeter and it was a nice beer, but somehow I expected more. Apparently I don’t really like port infused beers (like Broeder Jacob’s Double Port).

Tsarina Esra Reserva – Brouwerij De Molen
Tsarina Esra is one of De Molen’s more impressive beers. Which is saying a lot from a brewery like that. It’s huge in every possible way except the size of the bottle (25cl), but it’s enough. A sipper that’ll keep you occupied for a while. Highly recommended.

WRCLW Rye RIS – Browar Stu Mostów
My first Polish beer. I love rye. This one is no exception. A fairly regular (but good) RIS, which is slightly enhanced by the slightly more spicy rye flavors. A good choice from Browar Stu Mostów.

Taronja HoRyezon – Edge Brewing Barcelona
Another rye IPA. This just might be a style I’m diving into when possible. I absolutely love it, and this one is no exception. Great stuff from the American Spaniards.

Valravn – Thornbridge Brewery
I had this once before and when I found myself at the Thornbridge bar in Den Bosch once again, my choice was an easy one. This was available, this it had to be. Great depth, great flavors and just enough out of the box to be really, really interesting. With a nice bit of acidity.

Brooklyn Sorachi Ace – Brooklyn Brewery
This is a shit beer. They’ve managed to cram so many lime flavored hops in there that it’s on the brink of tasting exactly like washing-up liquid. Steer clear. Although, you should leave the bottle/glass airing for a while and then it becomes acceptable. Still, that’s not they way of the IPA.

Barrel Aged Albino Squid Assassin – BrewDog
Oh look, a Rye IPA! And one that’s barrel aged as well. Right up my sleeve. Recommended if you can find it, because it’s friggin’ awesome.

Mosaic Pale Ale – Brouwerij ‘t IJ
Of the regular IPAs this month, this is my favorite. Not exactly single hop, if I recall correctly. However, that shouldn’t spoil the fun, since it’s very well made, has a gorgeous label and is just bloody amazing.

#MashTag 2016 – BrewDog
A huge IPA with an ABV of 10.5%. Massive flavor, and really good. Yet, somehow, not one I will remember for long. While I do remember thoroughly enjoying the 2015 edition, I had to look this one up. 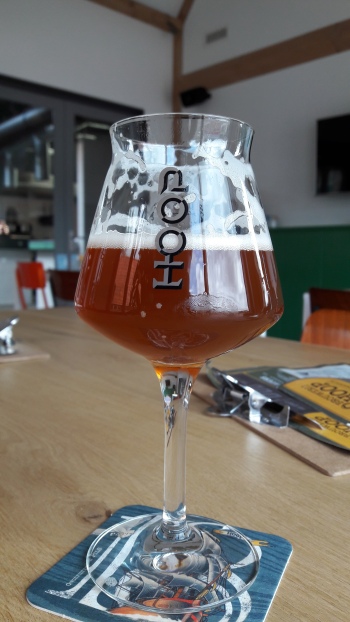 I went to visit Brouwerij Hoop last month. It’s a new brewery which only opened in May or so. The guys who run also run Breugem across the street. This scared me a bit since Breugem mostly makes ‘not-so-interesting-beers’. However, Hoop does things a bit better if you ask me.
They run a nice looking building with a lot of seating available, and a closed off area so we could go there with the kids and not fear for them running off in the street. Good stuff! Especially since it’s only a fifteen minute bike ride from my home.

Kaper – Brouwerij Hoop
Their IPA, which is good but not great.

Waterwolf – Brouwerij Hoop
A very acceptable and drinkable saison. I enjoyed this one more than I expected. I love the twist with all the spices in the brew.

Bleke Nelis – Brouwerij Hoop
A pale ale (without the India bit) and my favorite of the afternoon. Enough hops for bitterness, but it wasn’t the only feature. Fruity because of the hops used. Really good!

Now I have to pick a favorite. In this case that’s almost like picking your favorite child. There have been so many great beers that I almost want to pick one per category, but I think that’s cheating.

But, if I have to pick one it’s Lervig’s Three Bean Stout. That just has it all. It’s big, it has lots of depth and it tastes like something I’ve never encountered before. In short, it’s bloody awesome. Now the only thing left is getting some more of them. And all the others in the above list. 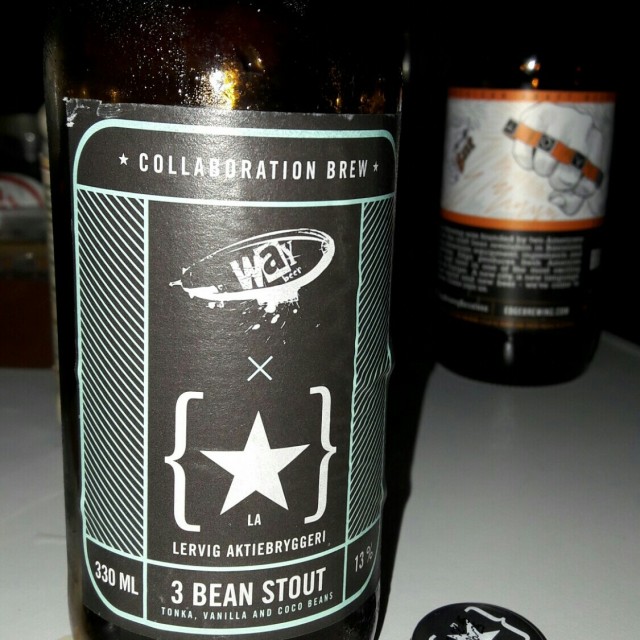 I'm very interested in booze, with a focus on whisky. I like to listen to loads of music and play lots of Magic: the Gathering, and board games too. I'm married to Anneke, have two daughters Ot and Cato, a son Moos and a cat called Kikker (which means Frog, in Dutch). I live in Krommenie, The Netherlands.
View all posts by Sjoerd de Haan-Kramer →
This entry was posted in - Beer, - Festival and tagged Alvinne, Bakunin, Bakunin Brewing Co., Beer, Brewdog, Brouwerij 't IJ, Brouwerij De Molen, Brouwerij Hoop, Brouwerij Kees, Cascade Brewing, Edge Brewing, Guinness, Jopen, Lervig, Nogne O, Omnipollo, Orval, The Wild Beer Co., Thornbridge. Bookmark the permalink.