Whisky in Leiden is the annual whisky festival hosted by Whiskysite.nl, or De Druiventuin, or whatever their exact name is. They’re an awesome and vast whisky shop in, you guessed it, Leiden.

Ever since Whisky Live NL moved back to The Hague they’ve been hosting the festival in the Pieterskerk. They also bottle at least one single cask of whisky, this year they even have two.

This Millstone bottling, from the Zuidam distillery in The Netherlands is last year’s release. It’s only three years old and could technically even be only two. Add to that that it a peated whisky from a PX cask, and you know you’re in for a wild ride. 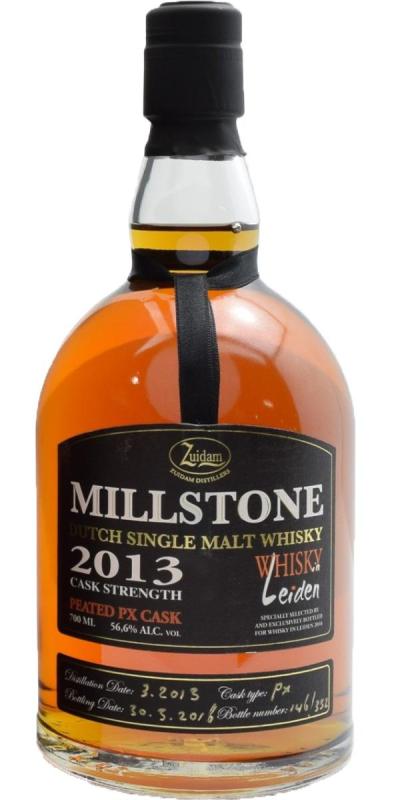 Sniff:
There’s lots of oak, lots of sherry and quite a young spirity-ness. None of this is surprising. It’s bitter and sweet, with tobacco, charcoal, peat and dried prunes. Some cork, soil, and coffee beans. A rather clunky whisky.

Sip:
The palate is not as sharp as you’d expect, but it does have a serious bite. Lots of oak and peat, smoke and sherry. Sweet, with fruit and soil. So earthy too, with malt. Some mushrooms and beefy notes. Mocha beans.

Swallow:
The finish shows the youth of the whisky again, with lots of spirit. Sweet and fruity, plus all of the above.

There is so much happening in this whisky that there is absolutely no balance. Also, this whisky is quite boorish, so to say.

When this came out last year I bought it for a bottle share that only sold some three shares, so I had 40cl to drink myself. I only started to do that recently with my friend JPH when we were playing Magic: The Gathering till 3 AM. It works really well if you’re not paying a lot of attention. It demands some attention at least, and makes you realize that it’s a really great whisky to just sit, drink and enjoy.

While this whisky would’t really be the star of the show if you sit at a formal tasting in which you really start assessing a dram and looking for depth and balance. And while there’s not much depth, or balance, there is flavor by the boat load. Therefore it actually is a great little whisky.

I sincerely had fun drinking this, and finishing the bottle last weekend. I hope there’ll be more of this kind of stuff from the Zuidam family. As I once remarked with the most recent Malt Maniacs Awards: I should pay far more information to Zuidam’s whiskies.

I'm very interested in booze, with a focus on whisky. I like to listen to loads of music and play lots of Magic: the Gathering, and board games too. I'm married to Anneke, have two daughters Ot and Cato, a son Moos and a cat called Kikker (which means Frog, in Dutch). I live in Krommenie, The Netherlands.
View all posts by Sjoerd de Haan-Kramer →
This entry was posted in - Festival, Millstone, Zuidam and tagged 2013, Dutch whisky, Festival bottling, Millstone, Sherry Cask, Whisky in Leiden, Whiskysite, Zuidam. Bookmark the permalink.