Anyway, I couldn’t make it to the tasting back in 2015, but Rob (the owner of the shop) was kind enough to give me a set of samples which I tried over the summer holiday. As you might realize by this statement, I am not only behind in writing tasting notes, but also in publishing them on the blog.

However, I am currently catching up a little bit, and this is one I had on my list for a while!

The theme of the tasting was ‘The King’, since the shop is commonly known as ‘De Whiskykoning’, or The Whisky King. Old blends with ‘king’ in the name. Let’s dive in! 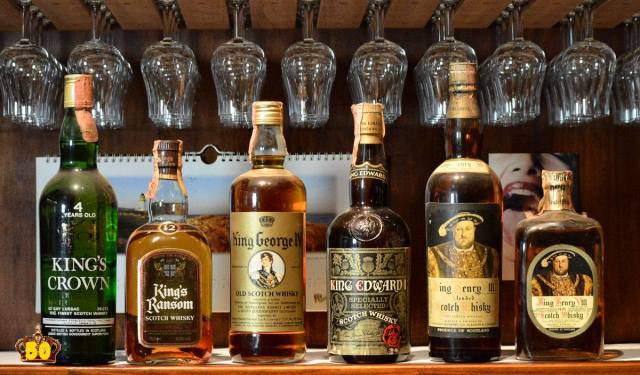 Sniff:
Quite some Old Bottle Effect, with a hint of staleness. Lots of old malt and a rich kind of beer. After a few minutes it gets a bit sweeter, with more straight forward malt.

Sip:
A bit fiercer on the palate than I expected. Lots of sweetness. A bit more modern than the nose suggested. Lots of grain, barley and wheat or corn.

Swallow:
Again, a bit stale, with loads of barley and a bit more oak than before. A short finish, though.

Typical for the seventies style in which things already got a bit more like in the eighties. A bit on the light side, with a decline in malt used, compared to grain whisky. More neutral.

Sniff:
Lots of crisp grain and malt. Unmalted barley, some dry oak, rather fresh. A whiff of funkiness from the old style distillate.

Sip:
Rather sweet with barley sugar and wine gums. A hint of the plastic bag the wine gums come in. Some dry oak, oak shavings.

Swallow:
The finish shows the age of the bottling. That old style funkiness, some oak and lots of malt. Quite long, and lovely.

Almost Irish in style, with the wine gums and wine gum bags. However, the style of malt jerks it right back across the Irish Sea. Great stuff, and an indicator of why blended whiskies were awesome back in the day.

Sniff:
Properly old and funky blend, with hints of leather and hessian. Old malt, and some copper. Old casks in dunnage warehouses. Some soot and dirt and cement.

Sip:
The palate shows dirt and soot, but with quite a lot of fruit. Apricots and figs. Some oak, barley, hessian and straw. Very gentle, but with lots of flavor.

Swallow:
Very similar to the palate, but slightly more dry. Very gentle, with mostly fruit, barley sugar and some of the funkiness remaining.

Cracking stuff. A bottling from the early seventies, so distillate from somewhere in the sixties, and early- to mid-sixties.

Sniff:
Sweet and heavy, with a lot of fruity Speyside style. Lots of sherry, but rather well balanced. Dates, peaches, hints of mocha.

Sip:
Very smooth, slightly less sweet than the nose, but not less fruity. Peaches and apricots. Some barley and vanilla. A whiff of mocha again.

Swallow:
The finish is slightly more flat, but still fruity. Still with peaches and apricots, with a slightly bitter edge.

Another very good example of old blends that are really, really good. The complexity is a lot more impressive than the more bland whiskies of today, and there are flavors in here that are no longer present in any contemporary whiskies. The benefits of more unique barley strains, a variety of yeasts and older casks.

Sniff:
Full on with the old blended whisky style. Funky, heavy with leathery and malty notes. Quite floral with daisies and hay.

Swallow:
The finish gives a lot of vanilla and sugary sweetness. Pastry cream, crumble pastry, custard. Very sweet with a hint of oak.

It’s a bit inconsistent, which isn’t uncommon with these old blends. Sometimes that just happens with a bottle that’s been around for 60 years. Unfortunately, it shows in this one. Still pretty good though.

Sniff:
Very different, with a lot more malt driven whisky than before. A hint of smoke, and salinity. Some heather, grass, green malt and fresh oak.

Sip:
Quite a bit more sugary and malty than I expected. Very typical for an old blend. The hint of smoke is still here, but much more timid than before. Some slate, grass, heather and honey.

Swallow:
The finish is a bit bland, to be honest. There are some flavors happening, but it seems not to go in any particular direction.

The nose is what makes this whisky. The palate has gone stale over the many decades on a shelf somewhere. The finish is all over the place, but it’s completely out of sync with the palate and the nose.

So, six whiskies and four years later, I’ve finally gone through the tasting that I wanted to blog about for a while. The main reason I’ve not done this earlier is that there’s just not that many evenings on which I have the time for six drams, on my own. Of course, there’s some, but you also have to remember the samples waiting patiently in your cupboard…

All in all, George and Edward were the most impressive whiskies of the lot, but the overall level of all these old 40 and 43% drams was quite high. It shows that a tad more malt and more diversity in distillation of said malts make quite the difference to a dram. But of course, ‘the recipe hasn’t changed in decades’ if you believe the big blenders…

Thanks to Rob Stevens of Whiskyslijterij De Koning for the samples, and sorry for the ridiculous delay in reviewing them!

I'm very interested in booze, with a focus on whisky. I like to listen to loads of music and play lots of Magic: the Gathering, and board games too. I'm married to Anneke, have two daughters Ot and Cato, a son Moos and a cat called Kikker (which means Frog, in Dutch). I live in Krommenie, The Netherlands.
View all posts by Sjoerd de Haan-Kramer →
This entry was posted in - Blended Whisky and tagged Blended Whisky, De Whiskykoning, Free Sample, King Edward I, King George IV, King Henry VIII, King's Crown, King's Ransom, Tasting, Whiskyslijterij De Koning. Bookmark the permalink.