On April 21st a couple of friends and I went to partake in the annual Whisky Lunch hosted by our local liquor shop and restaurant ‘De 5e smaak’ (the fifth flavour). I went there last year as well, with my father in law but he couldn’t make it this year because of his golf competition.

The biggest difference with last years event is that I took way more notes there than I did this year. I decided it was time to have some fun instead of always being ‘on the clock’. Not that I get paid or anything, but my focus has shifted a bit.

Whisky to warm up:
Adelphi Fascadale 12 year old. A nice and surprisingly fruity Clynelish bottling. It did have a bit of the Clynelish greasiness and waxiness, but the focus was heavily on the fruit. First fill bourbon barrels would be my guess. A lovely dram. 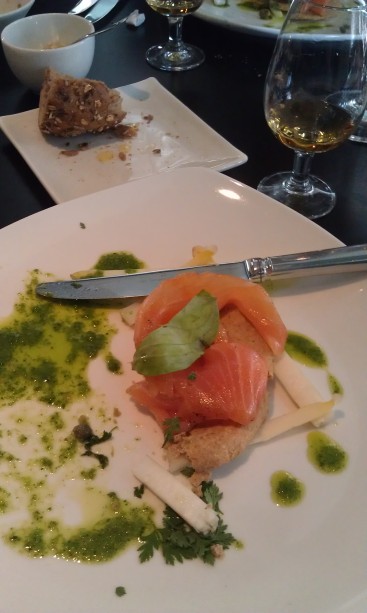 1st course:
Smoked salmon with a whisky glaze, bannock bread and tiny raw asparagus. The whisky accompanying it was a 12 year old Bowmore by Berry Brothers and Rudd. The salmon was great with the heavy flavours of the bannock bread counteracting the salty flavours. The whisky was an easy pick since Bowmore and smoked salmon always work.

2nd course:
Fresh and rather chunky paté of at least pork and beef, an orange marmalade and rocket. I personally don’t care much for rocket but the orange and paté was a match made in heaven. Absolutely loved it. The whisky that was served was a 19 year old Springbank, again by Berry’s. The whisky was heavy, but so were all the flavours in the dish. The orange was incredibly sweet without becoming sugary, so it did a bit to offset the thick paté and booze. Good stuff! 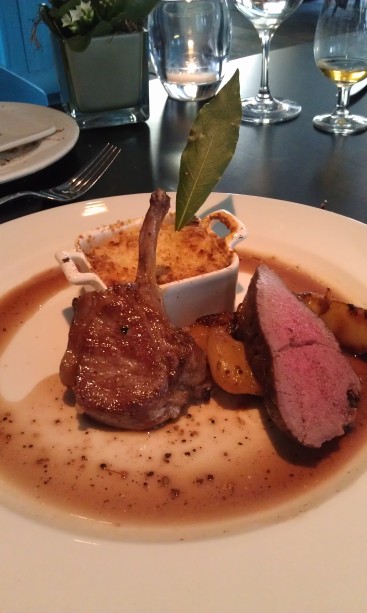 3rd course:
Two preparations of lamb with sheppard’s pie, and Jerusalem Artichocke (I had to look that up). With it came a seven year old Glentauchers. The lamb was great with the table being divided which preparation was better. The whisky was a bit less so. It didn’t show much depth and in general was considered ‘not so good’. Still pretty okay for a seven year old, but I don’t really see why this was bottled.

4th course:
Lemon curd tarte with merengue, served with a sauce of lemon and ginger. The whisky was Wemyss’s Ginger Compote. An easy pick since a very deciding flavour is in the name. The tarte was absolutely terrific with a rather large blast of acidity from the lemon (I love lemon). The sauce had ginger in it which I barely picked up, mostly because the whisky had blown all ginger-appreciating taste buds to smithereens. It did match quite well though. I still, however, don’t really know why there was vanilla ice on the plate though.

So, concluding: The food was great. I love the restaurant and should go there more often. The first three whiskies were good too, but the latter two I wasn’t a big fan of. Still, the combination with food, drinking whisky with friends and all that is reason enough to book a ticket next year. A great afternoon was had by all!

I'm very interested in booze, with a focus on whisky. I like to listen to loads of music and play lots of Magic: the Gathering, and board games too. I'm married to Anneke, have two daughters Ot and Cato, a son Moos and a cat called Kikker (which means Frog, in Dutch). I live in Krommenie, The Netherlands.
View all posts by Sjoerd de Haan-Kramer →
This entry was posted in Bowmore, Clynelish, Glentauchers, Springbank, Undisclosed and tagged Adelphi, Berry Brothers and Rudd, Bowmore, Clynelish, Creative Whisky Company, Glentauchers, Wemyss. Bookmark the permalink.