Bowmore Laimrig. Another whisky named after something you can see from the distillery. In this case the pier. Of course in Gaelic.

Personally, I don’t really care for all the Gaelic names for whiskies, but on the other hand, any name is as good as any. In this case at least it has something to do with the distillery or its environment.

The Laimrig is, as far as I can see, the sherried counterpart to the younger Tempest. They are released in batches with similar, but varying flavours. A while ago there was a bit of a ruckus on Twitter about this. Apparently, everybody wanted to have this bottle, so when it popped up I bought one. Again, to share with someone else to keep costs down. Half a bottle is enough to really get to know a whisky, I think.

Anyway, I’m glad some distilleries aren’t making a massive deal about still having sherry casks and releasing the whisky that comes from it. Contrary to many releases this doesn’t cost hundreds of Euros, still has some age to it and is bottled at cask strength. Way to go Bowmore! 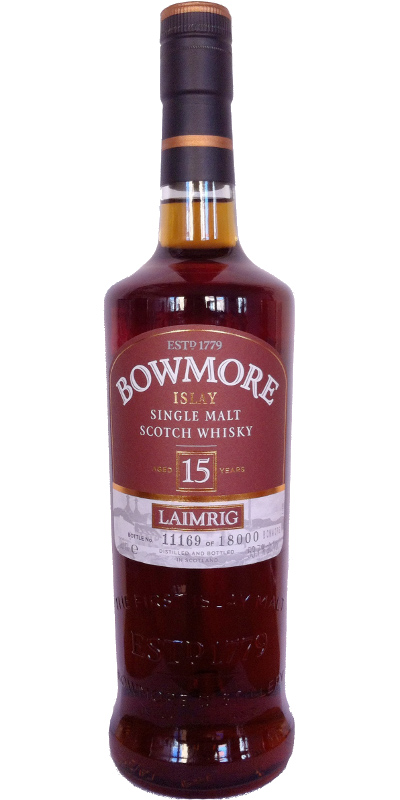 Bowmore Laimrig, 15yo. Image from Whiskybase

Sniff:
While the peat isn’t overwhelming right away, it, in combination with a big dollop of sherry make for a very intense nose. It does mellow after a couple of minutes, and leaves room for sherry scents, fruity and sweet. A bit of wood and the smoke of course. Not too much of that.

Sip:
Again, really intense at first. Smooth after that, although it’s still cask strength. Sweet, with the syrup of mixed tinned fruit. Some red fruits too. Oak, slightly peaty with this going towards some medicinal flavours. Also, rather salty.

Swallow:
The finish doesn’t have that intensity at first, but goes right towards the tasty bit. It’s long with sherry, stewed strawberry, peaches. A whiff of peat, not more.

This is another very tasty Bowmore. They’ve been upping their game over the last couple of years. While I still don’t like the 1980s bottlings that are still coming out (the ones I’ve tried, at least), their younger whiskies are awesome. Usually fair priced too.

The price of this one is something to be on the look-out for, since it can vary wildly (from € 90 to € 120 or so). Either way, it’s worth it. I like this stuff. I like Bowmore. I recently did a count and in my collection it’s only second to Springbank in population. The distance is very dependent on whether or not you also count Hazelburn and Longrow.

I'm very interested in booze, with a focus on whisky. I like to listen to loads of music and play lots of Magic: the Gathering, and board games too. I'm married to Anneke, have two daughters Ot and Cato, a son Moos and a cat called Kikker (which means Frog, in Dutch). I live in Krommenie, The Netherlands.
View all posts by Sjoerd de Haan-Kramer →
This entry was posted in Bowmore and tagged 2012, Bowmore, Islay, Laimrig. Bookmark the permalink.