Another book I read during my holiday in France. It seemed appropriate. First, to get this off my mind: I don’t believe the writers used their own names. It seems unlikely someone is actually named Artemis, and then the combination with Peter Verte (Green…) seems even more far fetched. Kind of lame…

I once read a book on Absinthe, a couple of years ago. The Little Green Book of Absinthe didn’t really go in to the production process and focused heavily on cocktails and the current standing of the drink in the United States (and Europe, but less so). It was interesting, but not as in depth and geeky as I had hoped.

Then I came across this little book when I visited Van Wees in Amersfoort last year with Tom and Gal, on our way to Maltstock. It was discounted and only cost me about € 4.75 so no reason to not pick it up. It looked rather geeky and again, I hoped it would explain the production process and how it came to be a bit more. 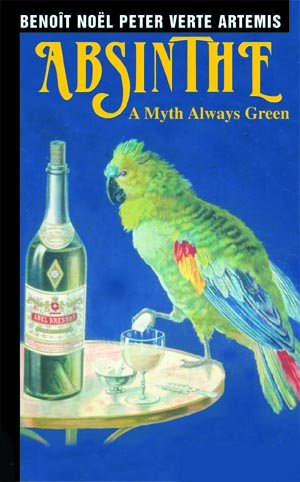 How Absinthe came to be seems hard to pin down. Everybody knows where it comes from, when it was ‘invented’ and what happened next. No one seems to care about what people were thinking of making a drink so bitter that it needs sugar and water to be accepted by the masses. Schnapps, Eau-de-vie and other infused and/or macerated distillates are known, but at some point Absinthe added itself to that list. For unknown reasons.

Anyway, this book also did not go in to that. It did explain a bit of it’s history, but from a social point of reference. It looked at the impact it had on (mostly) French culture, who were known drinkers of the green fairy and how it made its way into lots of impressionists painters works, and poetry and fiction of the late 1800s.

The take on how it was outlawed during the first world war was very interesting. Although people are lead to believe this had a lot to do with the supposedly hallucinogenic workings of wormwood, the writers of this book have another opinion.

According to Noël, Verte and Artemis the French wine industry was still recovering from the Phylloxera disaster that struck them in the last quarter of the 19th century. By then they had lost most of the market for brown distillate with whisky taking over almost every export market France had. Apparently the industry lobbied for a ban on absinthe under the false pretense of that being the cause of all evil in the country. Very interesting and a nice bridge between whisky and abinsthe!

Unfortunately, after you’re halfway through the book, it turns out to be rather dated. It was written about a decade ago, before most bans were lifted and although it does refer to quite a few distilleries making (according to the writers) a lot of inferior imitation products, there is barely any info on what’s happening now (obviously).

After this gap in recent history it also goes into cocktail recipes. Luckily not so many but the rest of the book is filled with other marginally interesting information. There’s a list of distilleries and the writers’ view of them and their products. There’s also a list of Absinthe paraphernalia that is rather uninteresting to read. You can only read about spoons for so long, right? And that’s about it.

So, again, a book on absinthe that has its merits, but is about half as long as you expect it to be. Also, the references to writers and painters are sometimes far fetched, or very obvious. The information about its ban, the period it happened in and the fact that this ban was not as wide spread as I thought were interesting.

In short: A nice read, especially at less than five bucks, but not recommended if you’re into geeky information like you’ll find in many whisky books.

I'm very interested in booze, with a focus on whisky. I like to listen to loads of music and play lots of Magic: the Gathering, and board games too. I'm married to Anneke, have two daughters Ot and Cato, a son Moos and a cat called Kikker (which means Frog, in Dutch). I live in Krommenie, The Netherlands.
View all posts by Sjoerd de Haan-Kramer →
This entry was posted in - Book, - Other Spirits and tagged Absinthe, Artemis, Book review, France, Noël, Switzerland, Verte, Wormwood. Bookmark the permalink.