In the rather low amount of books I’m reading this year, there of course are whisky books. The one that describes the rebirth of Bruichladdich (waking a giant, they call it) was mentioned a while ago somewhere and that reminded me to get one.

Luckily, on play.com there was a second hand version available so it only set me back a couple of bucks. Generally whisky books are fairly expensive due to high levels of production and low amounts of sales, but this one is just a paperback pocket size one, so it shouldn’t be.

The book is divided into several chapters telling the background of the main players in the Bruichladdich resurrection (Mark Reynier, Simon Coughlin, Jim McEwan, Andrew Gray and Duncan McGillivray), and from there it’s a bit about the buildings, the surroundings, what they had to do get it up and running and the first distillations. Then there’s a chapter on the spirits available now they’re a couple of years in, and a bit on their ambitious plans for the future (of which we know now, didn’t work out). 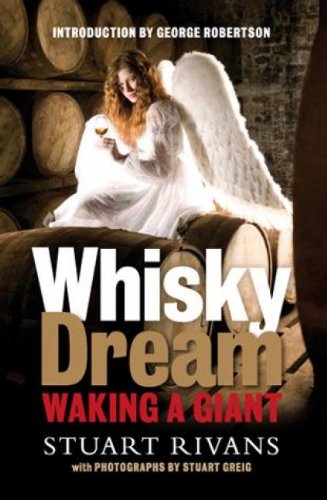 I knew beforehand that Mark and Simon came from a wine background in London, but the way they got into the whisky industry was quite interesting to read and well written, as is the whole book. Jim McEwan is not a secret to anyone who has spent a year or so being fanatical about whisky and reading some things here and there. Mr. McEwan is one of the big guns in the industry. Duncan is an important person at Bruichladdich too and I knew of him beforehand but to read his story was interesting too. Only the chapter on Andrew Gray seemed a bit out of place and the tone of the entire book shifted a little bit after that.

The bits on the distillation, the buildings and the town of Bruichladdich were all handled by than and while interesting didn’t tell any spectacular anecdotes of any kind. It was just well written and easy to read information, but still rather dry.

The second half of the book shifts its point of view a little bit. Whereas the first half was factual information and stories from the ‘main characters’, the second part feels like a huge marketing exercise. A lot of information is given about the plans with Bruichladdich and their spirit, but it’s of just ever so slightly lower quality than the first bit. And, while the first bit was about how cool the resurrection of a distillery is, the second is just about how awesome the whisky is and why everybody should be drinking it.

Of course, we all know Jim McEwan’s view on finishing or ACE’ing of whisky in all kinds of wine casks, since we all need more variety in what we drink (do we, really? of that kind?), but it just rambles on about the awesomeness of Port Charlotte. I had a weird feeling that they consider that to be the most important spirit of the distillery by how they went on about it.

Also, there are some minor things that didn’t sit right with me regarding the correctness of the information, and those stood out way more in the second half too. Simple thing like (not a quote) ‘when we were distilling our PC5’. I find it hard to believe that at such an early stage they already knew about the final whisky it would end up as. There’s more such things.

So, what to expect when picking up this book from the shelf. You get a very well written book on the resurrection of Bruichladdich. There’s a weird focus on Port Charlotte, and a lot of justification of wine cask usage. The anecdotes mostly by Jim McEwan and Mark Reynier are fairly awesome. There’s a lot of marketing done in the second half of the book which diminishes the story a little bit, but there’s still information in there too, so it’s not too bad. All in all, it’s all very well written and easy to read. I’m not entirely sure if a lot of background information is needed, but I don’t remember thinking it was a good thing I read a lot about whisky.

A fun read, but it won’t change your life or your outlook on Bruichladdich if you’re already familiar with the place and how it came to be.

The Whisky Dream by Stuart Rivans is available from Amazon for £ 0.01 (?)

I'm very interested in booze, with a focus on whisky. I like to listen to loads of music and play lots of Magic: the Gathering, and board games too. I'm married to Anneke, have two daughters Ot and Cato, a son Moos and a cat called Kikker (which means Frog, in Dutch). I live in Krommenie, The Netherlands.
View all posts by Sjoerd de Haan-Kramer →
This entry was posted in - Book, Bruichladdich and tagged Book review, Books, Bruichladdich, Jim McEwan, Mark Reynier, Octomore, Port Charlotte, Stuart Rivans, The Whisky Dream. Bookmark the permalink.