Somehow, Amsterdam is pretty dry when whisky is regarded. Admitted, there are two festivals and a bar with more than 1800 whiskies open, according to their website. There also is a whisky shop quite a ways out of the city center.

But that’s it. One bar. One shop. Until recently. A couple of months ago a new whisky bar opened in Amsterdam called J.D. William’s Whisky Bar.

The first logical question, of course, is to ask who the heck is J.D. William? I don’t have a clue. The website doesn’t inform us about that either. I guess it’s a fictional name which just happens to sound American enough to use. Like Jack Daniel, Elmer T. Lee, George T. Stagg, and about a 100 more bourbon brands.

The next question, and the more important one is: Is the bar any good? Yes. Yes it is. They don’t have 1800 different whiskies open, thank God*. There are some 200 open bottles, and there’s a list of about 10-15 craft beers from all over the place (NL, IT, UK, USA, BE to name a few). Having a limited number of options is good for me since I find it hard to choose, plus I want a fresh tasting bottle.

Also, you can eat at J.D. William’s. I went there with colleagues on a Tuesday which is taco night. I found this a surprising choice of theme in a whisky bar, but the tacos were great. You can choose from three different ones (beef, chicken and falafel), and after tasting through that entire menu, I decided I liked the beef best and ordered another one.

With dinner we had some beers, and after we decided to switch to the hard likker. This is where we get to the awkward bit for every whisky bar: pricing. I’ve had some bad experiences with this in The Netherlands, where bottles get inflated hugely to the point where I once had to pay € 7 for 2cl of Lagavulin 16, at a time a bottle only cost me 40 bucks. 7 (price) x 35 (amount of glasses poured) = € 245. Over six times the value of the bottle for average Joe. The bar could buy cheaper.

At J.D. William’s this happens too, but only on rarer bottles. Lagavulin 16 was 9 euros, but that was 4 cl. Lagavulin 12 Cask Strength was 10 euros. Contrary to the rather affordable Lagavuling 12 CS were some indie bottlings of which a bottle sit at the same price point per bottle but those were priced at about € 20.

So, pricing is generally acceptable, if you pay attention to the menu and not order off the shelf. A lot of prices are very okay, but some are ridiculous. Somehow a Bruichladdich Islay Barley was more than twice as expensive as other whiskies at the same retail value.

All in all, I found this to be cleverly done. They didn’t only pay attention to the value of a dram, but also to the perceived value of it, and the rarer the bottle, the higher the price. This is clever because those bottles are the ones to sit around longest and by doing this, you at least get your money back before the go flat. 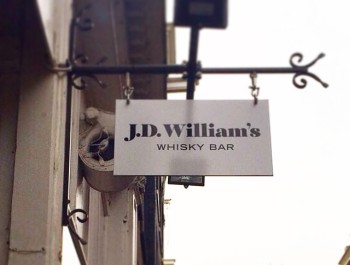 Then the atmosphere. It’s great. It’s modern without being too ‘hipster’. It’s fitting for a whisky bar and for Amsterdam. I think this too is cleverly done.

The thing that bothered me most is that halfway through our dinner they wiped down the bar with really smelly cleaning spray. We were having tacos at the time so it wasn’t too bad but if my € 10 dram suddenly was overpowered by chloride and lime I’d be pissed.

By the time the evening with my co-workers was over I had had:

Concluding: Highly recommended and I’m really happy with this addition to the Amsterdam ‘quality booze scene’.

J.D. Williams’ Whisky Bar is located in Amsterdam’s city center at Prinsenstraat 5, about a 5 minute walk from Central Station.

* Having 1800 whiskies open in a tiny bar in Amsterdam sure is an achievement, if they had enough space. They don’t. A lot of bottles have to lie down. And with 1800 bottles open it takes forever for a bottle to go empty, except for the usual suspects. This means huge surfaces for oxidation, and therefore MY IDEA that those whiskies can’t be good anymore.

I'm very interested in booze, with a focus on whisky. I like to listen to loads of music and play lots of Magic: the Gathering, and board games too. I'm married to Anneke, have two daughters Ot and Cato, a son Moos and a cat called Kikker (which means Frog, in Dutch). I live in Krommenie, The Netherlands.
View all posts by Sjoerd de Haan-Kramer →
This entry was posted in - Bar and tagged Amsterdam, J.D. William's Whisky Bar, Whisky Bar. Bookmark the permalink.