I’ve traded some Whiskybase samples recently, and wanted to try this wee Littlemill of theirs. I know one of the guys who runs the shop is a huge Littlemill fan and with the releases of the last couple of years a lot of others have joined him.

I had not tried this when it came out since I was not one of those huge fans. I tried some official bottlings years ago which turned off from the distillery. It appears, however, that Littlemill needs to be twenty-something years old to show its true potential.

It probably started with the first Archives release some years ago in the Blind Tasting Competition that they got back on my radar. Shamefully I had not bought a single bottle of this distillery ever. I might have to change that but with the still hit and miss status of the distillery, I dare not spend 150 bucks on something I’ve not tried before.

Anyway, this release was done for the Whiskybase Community milestone of having 40,000 different bottles in their database. That is a huge number of whiskies, but they’re still going strong as they just released the celebratory bottling for number 60,000. Obviously, things have slowed down with all ancient releases being in the system by now. Or, at least, most of the known ones. 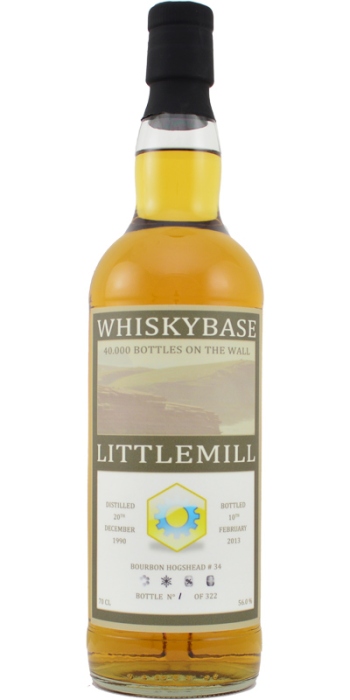 Sniff:
Lots of malt at first, with vanilla, oak and quite some punch. There’s pepper and a light fruitiness. Vanilla custard, apple crumble and some grassy notes.

Sip:
Soda water at first, with pepper and oak to follow it up. Quite sharp and dry. Spices, pine and mint. It gets a bit fatty after a while with lots of vanilla and lots of white oak. Very traditional.

Swallow:
It leaves a dry but fatty layer after you swallow it. Spicy with that pine note showing up again. Quite long and slightly flowery.

This is a nice whisky, but I find the nose to be quite ‘default’. By that I mean there’s so much vanilla and white oak going on that it completely overpowers the distillery character resulting in a nose that can belong to the whisky of a dozen different distilleries. I prefer my whisky with a bit more discerning character to show its provenance.

Having said that, the palate and finish are pretty great. I love the addition of pine to the vanilla and white oak of the nose. It’s quite traditional, but very good at what it does. But in the end I prefer the bottling they did for hitting 50,000, which was that teaspooned Balvenie.

I'm very interested in booze, with a focus on whisky. I like to listen to loads of music and play lots of Magic: the Gathering, and board games too. I'm married to Anneke, have two daughters Ot and Cato, a son Moos and a cat called Kikker (which means Frog, in Dutch). I live in Krommenie, The Netherlands.
View all posts by Sjoerd de Haan-Kramer →
This entry was posted in Littlemill and tagged 1990, Bourbon Cask, Closed Distillery, Littlemill, Lowlands, Whiskybase. Bookmark the permalink.