About a million years ago (on February 19th of 2015, in the time of the mammoth) I did a bottle share of Highland Park’s then newest release in their ‘short series’ stuff. The Odin. The follow up and grand finale of Thor, Loki and Freya. It wasn’t cheap but I was able to get a bottle at initial retail price, thanks to Richard Blesgraaf.

Somehow, it sat on my shelf awaiting review for a couple of months and I just didn’t seem to get around to it. I did to a hundred or so other samples, but you know how things go. Last night, I finally tried it. And I emptied my sample. Decluttering and such.

So, Highland Park Odin. 16 years old, and made up of undisclosed whiskies, and ‘limited’ to 17000 bottles. Which boils down to “everybody in the world who spends this amount on a bottle and wants one can get one”. The official web page contains no information on the casks that were used, but I guess there’s a mixture of American and European oak in there.

Anyway, apart from its ABV and the age there is barely any information, but given there’s an age, it’s more than we’re getting in many cases nowadays. 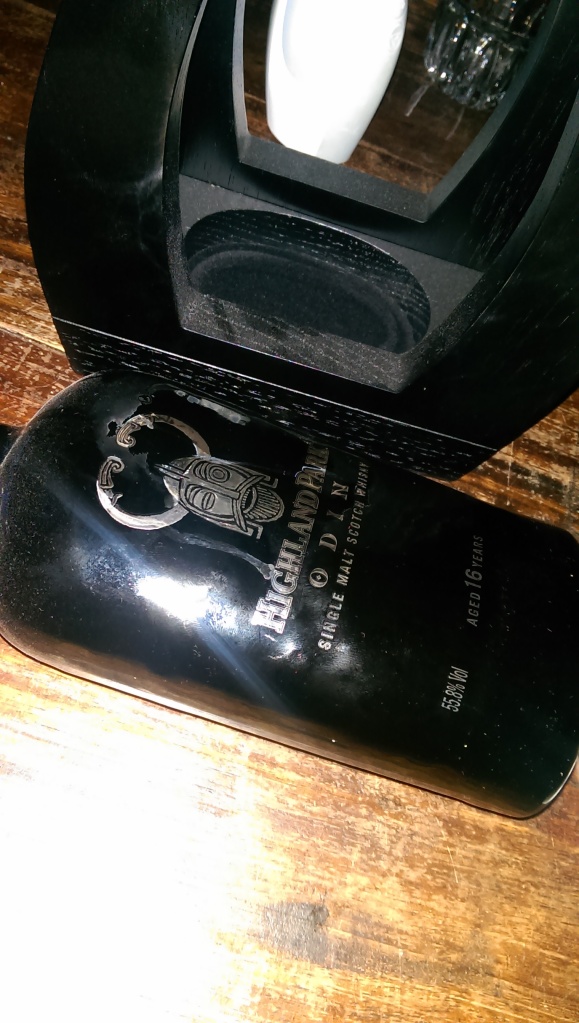 Sniff:
Juicy and fruity sherry, the Oloroso kind. Light smoke but quite a bit of that compared to what I expect from Highland Park. Slightly dry with some straw, and there’s dried peach and dried apple. Quite sweet.

Sip:
The palate is sweet again. Rich and sharp too with spices and fruit. A tad dry, with straw and heather and some earthy tones. I get red fruit suddenly, which is a bit overripe. Some chili pepper late in the game.

Swallow:
The finish brings out the sherry sweetness again. There’s some oak and some fruit. It’s dry and long. Some red fruits in the form of sweet cherries and peach. A trace of smoke and quite woody compared to before.

Strangely after half an hour or so I suddenly get a taste of bacon after taking another sip.

I guessed the kinds of oak used on general experience of ‘engineered’ whisky and the flavors too. Engineered is not meant in a negative way, by the way. It’s just that currently, more whisky is blended to fit a certain profile instead of letting the whisky decide all of the outcome.

Anyway, this is a tasty whisky. There’s a lot of good things it has going for it, mostly the sweet fruit and drinkability. The almost 56% abv is not noticed in full and when tasted blind I would have guessed 50-52%, I think. The combination of fruits with everything else gives you quite a bit to discover but if you want to sit back and just drink a whisky this one serves that purpose too.

So. Yes it’s good. But I don’t think it’s 250 euros good. And that’s just the initial price, which currently sits at about € 400. For that amount of money you can get more and better.

Of course, Highland Park is a company which needs to make a profit. Their limited releases do exactly that and since the world is happy to oblige, I can’t blame them. I do think, however, that the target audience of these kinds of whiskies are different than the ‘analysts’. This is a luxury product that warrants a certain status, and that’s what it’s aiming to be. Well done, Highland Park.

In short. I like to have tried it. I don’t mind buying a sample at cost, but I’m glad I didn’t get a full bottle.

I'm very interested in booze, with a focus on whisky. I like to listen to loads of music and play lots of Magic: the Gathering, and board games too. I'm married to Anneke, have two daughters Ot and Cato, a son Moos and a cat called Kikker (which means Frog, in Dutch). I live in Krommenie, The Netherlands.
View all posts by Sjoerd de Haan-Kramer →
This entry was posted in Highland Park and tagged Bottle Share, HIghland Park, Islands, Kirkwall, Odin, Orkney, Valhalla Collection. Bookmark the permalink.