For some distilleries there are years that are much better than others. For others it’s a couple of years. I think most of the people who read my ramblings know at least some name-year combinations that rock a lot of people’s boats.

Lochside 1981, Caperdonich 1972, Port Ellen 1978 (among others), Brora 1974 (among others), Tomatin 1976 and also for BenRiach 1976 was an epic year. I’ve tried a couple of releases from this annum and all were pretty damn awesome. It’s not even necessary to go back that far. For example, Clynelish is doing fantastic with their 1997 releases. Bowmore has 1995 going for them.

A couple of years ago this BenRiach 1976 was discounted at Whiskysite.nl, and it so happened to be that I had a couple of Ardbegs Jack wanted to have of mine. A trade was quickly arranged and bottles were swapped. I managed to get my hands on my very own BenRiach 1976!

I was thrilled, and I didn’t wait very long to open it. Not even a week I think, and that was mostly because I took the wrong bottle home and we had to send replacement to and from Leiden.

Last weekend, I emptied it. So, it took me a couple of years to go through the bottle, but I don’t think this stuff should be rushed. It waited 33 years in a cask before that was emptied, it can handle a couple more years in a bottle. 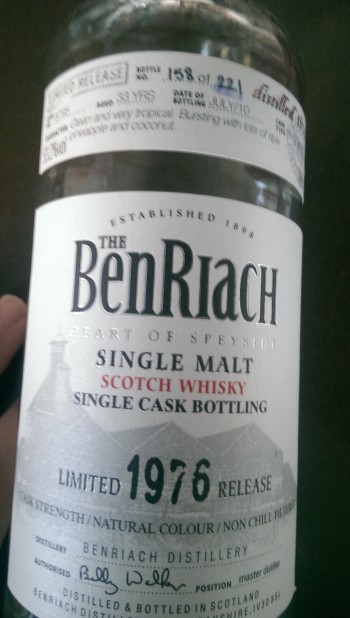 Sniff:
The nose is stronger than I’d expect from an oldie at 53.2%. It’s slightly dusty with lots of dried pineapple. Some fresh pineapple too, but the dried kind if more prominent. A slightly salty touch with some hints of barley and barley sugar. A tiny trace of peat, maybe? Dried mango, oak and sugar.

Sip:
Sharp again, but light. Fruity mostly, tropical and dried. Peach, pineapple, mango and lots of coconut now. A hint of straw, vanilla and pastry cream. Some oak too but not as much as you’d expect from 33 years in a barrel.

I believe that according to the people who went to Serge’s ridiculous BenRiach 1976 extravaganza a couple of years ago, this was the least of the releases. He even calls it a letdown. While that may be true, I think this is a really epic dram.

I love dried fruits. I love pineapple and coconut. This stuff is just right for me. The combination of the two with some nice oak influences that turn deliciously bitter towards the end really does the trick for me and this was one of the best whiskies to ever be in my collection. A couple of random Ardbegs well spent, I think.

If you are at a festival or see samples of BenRiach 1976 coming by, do yourself a favor and try to try some. I can’t imagine someone not liking this style of whisky, even if this is my major benchmark and it’s the least of the releases.

I'm very interested in booze, with a focus on whisky. I like to listen to loads of music and play lots of Magic: the Gathering, and board games too. I'm married to Anneke, have two daughters Ot and Cato, a son Moos and a cat called Kikker (which means Frog, in Dutch). I live in Krommenie, The Netherlands.
View all posts by Sjoerd de Haan-Kramer →
This entry was posted in BenRiach and tagged 1976, BenRiach, Bourbon Cask, Single Cask, Speyside. Bookmark the permalink.