Ever since I tried a 12 year old Rosebank Flora & Fauna some ten years ago this Lowlands distillery has been a favorite of mine. I think it’s a shame it’s gone and there is no other distillery that comes close to similar spirit, especially not one of the currently open ones. Maybe St. Magdalene comes closest, but that’s been closed even longer.

Anyway, it’s a shame the bottles have all but gone and the ones that come out are so expensive or just not all that good that it’s actually no longer interesting to look in to new bottlings. Quite a bummer.

A while ago I swapped a bunch of awesome samples with GI, and this is one of them. There was also old Oban, Port Ellen and some others. I hope to review those in a while.

Oh, Silver Seal is worth mentioning too. This Italian bottler is known for both high bottle prices and high whisky quality. They charge a premium for their releases compared to some other bottlers, but in general that is money well spent. Over the years I’ve tried some of their bottles and most of the ones I can remember by heart were awesome (Highland Park and Macallan, mostly). 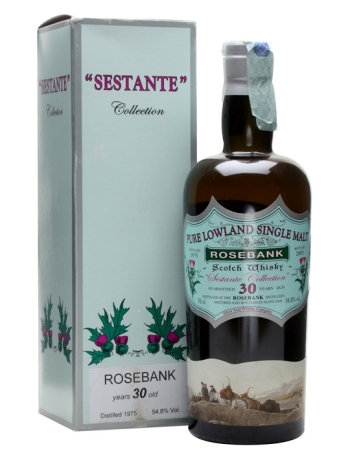 Sniff:
This one’s sharp with lots of dry straw and some vanilla. White oak shavings, lots of alcohol but also, real Rosebank character. Floral and some light fruits.

Sip:
The palate is quite sharp with alcohol and white pepper. A touch of sweetness after that, sugary with mango. Straw and vanilla again.

Swallow:
The fierceness of the whisky lingers, there’s some vanilla too. Quite long, but also quite simple.

This one needs water. With water the balance improves and it becomes more fruity with mango and pineapple. The finish is still dry with white pepper and straw.

This is a strange whisky. I find it hard to call it complex, since it’s not in my book. What it is, however, is awesome. This is typical Rosebank from beginning to end and I love it. The combination of the few scents and flavors I’m getting works really well and ticks a lot of boxes.

The drawback of this kind of booze is that a bottle of it will set you back hundreds of euros, if not crossing the 1000 euro line (The 55.8% version is for sale for € 2700!). It’s a shame, but that’s the way things are at the moment with those closed distillery. Luckily, I was just in time to this game to get to try whisky like this occasionally.

I'm very interested in booze, with a focus on whisky. I like to listen to loads of music and play lots of Magic: the Gathering, and board games too. I'm married to Anneke, have two daughters Ot and Cato, a son Moos and a cat called Kikker (which means Frog, in Dutch). I live in Krommenie, The Netherlands.
View all posts by Sjoerd de Haan-Kramer →
This entry was posted in Rosebank and tagged 1975, Closed Distillery, Falkirk, Lowlands, Rosebank, Sestante, Silver Seal. Bookmark the permalink.