Too many open bottles, part 2

Last year at December 30th I set myself a target to finish enough bottles to get to a grand total of 40 open bottles of whisky. Unfortunately, during the last half of the year, and especially after selling my bottle of Hanyu for a decent amount of money, the bottle shares grew rampant. Also, in some cases I kind of lost sight of the purpose of the bottle shares.

I do these because that’s a good way of being able to taste and assess a lot of different whiskies (or other booze) in an affordable manner with a couple of friends joining in. However, over the last couple of months I have also ordered the bottles for the share even if they didn’t fill up which ended up sitting on the shelves for months now. For example, the five bottles of Willett are over half full but opened and waiting to be reviewed. So is Highland Park’s Sigurd, Octomore 07.1, both BenRiach 25s and probably a few others that I can’t remember at this time.

With that in mind, and the vast amount of samples I’ve been going through over the last couple of months, I didn’t get my collection of open bottles down to 40. I knew I was setting a challenge since there weren’t many near-kills at the beginning of last year and I didn’t get around to doing many tastings at home at all. Add to that all the bottles that I opened over the last 12 months, which probably is about 20 to 25 or so, it just didn’t happen.

My wife is also getting rather fed up with the amount of shelves my booze is taking up and she’d love me to downsize a bit. I am trying to buy less and finish more, but it’s not always going according to plan. Sometimes you just get swept up in the moment and buy a few samples of some awesome SMWS bottles (right, Ben?)…

The crossed out sections need to go.

So, another target for 2016: Get the amount of open bottles down to 35. Currently I’m exactly at 54 open bottles (just counted them) so that means I have to finish at least 19 bottles, if I don’t open anything. I think it would be smart to finish a lot early on in the year and then decide whether or not I’m doing any new bottle shares, but we’ll see how that goes.

Regarding other booze. I did end up drinking a lot of beer too. Especially since our trip to England I got swept up in that for a while too. I’m nearing the end of the stash I amassed in the last months and I’m not planning on buying a lot more so that should be downsized a bit too. 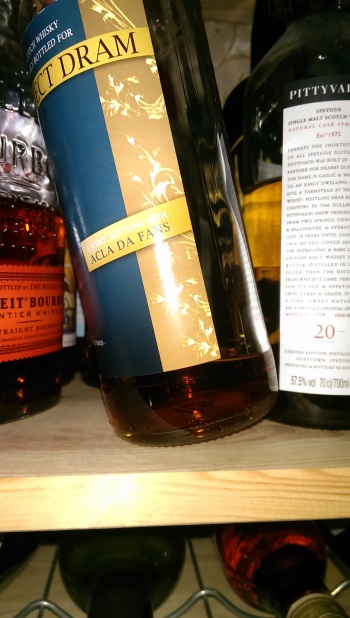 Ready for the kill shelf?

I do however, still love to get to know a lot of other distillates and drinks. I think I’ve gotten some understanding of Mezcal over the last year. I still want to get to know a bit more about Absinthe, but that list has been expanded with Armagnac and Sake, for some reason. I’m not planning on buying a lot anytime soon, but I can imagine doing a sake tasting with a couple of friends, or doing an Armagnac bottle share or so.

Aaanyway, these things are going to happen over the next couple of months:

I'm very interested in booze, with a focus on whisky. I like to listen to loads of music and play lots of Magic: the Gathering, and board games too. I'm married to Anneke, have two daughters Ot and Cato, a son Moos and a cat called Kikker (which means Frog, in Dutch). I live in Krommenie, The Netherlands.
View all posts by Sjoerd de Haan-Kramer →
This entry was posted in - News and Announcements and tagged Bottle Share. Bookmark the permalink.

5 Responses to Too many open bottles, part 2