A little while ago, I guess just in early December, Bram and Floris (the WhiskyNerds) announced their second cask. They did a GlenDronach earlier in the year which I (shamefully) have not reviewed yet. I have been enjoying it since I bought my bottle straight away.

I know Bram and Floris, and I know the whiskies they like. Not many people dislike that kind of whisky, but these guys are spoiled so it’s bound to be good. Then it turned out to be a Kavalan. While the entire planet seems to be smitten with love of this Taiwanese whisky, I’m not entirely convinced.

I do like their drams, quite a lot actually. But always in a way that I don’t want the entire bottle since, while they are damn tasty, they don’t offer much depth and I miss the lasting appeal that’ll get me through 70cl of high strength alcohol.

After finding out that this was not to be a sherry cask I was quite happy, since my favorite Kavalan is a bourbon cask from a couple of years ago which I tried at the WhiskyFair in Limburg an der Lahn.

Luckily, since I know these guys, they also know me (duh) and have sent me a sample. It seemed a nice way to kick off 2016. All in the theme of drinking less but better. 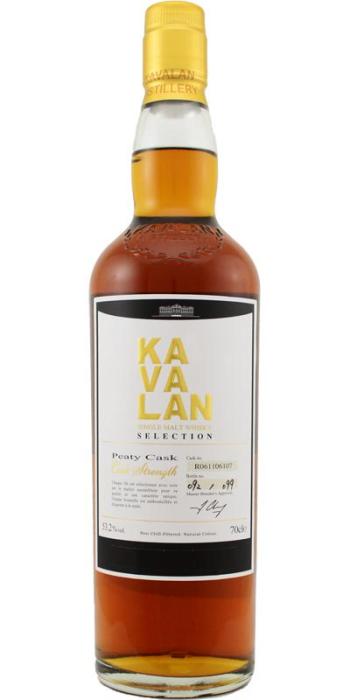 Sniff:
Rich and sharp at first, quite sweet and intense too. Lots of yellow fruits, like apple and melon. Straw, some light vanilla and a teeny tiny amount of smoke in the background. Quite a lot of oak though.

Sip:
The palate is sharp, and slightly lighter than I expected. Lots of fruit again. Apple, pear, melon too. Cantaloupe and galia. The smoke is present but very, very light. Quite a lot of oak again.

Swallow:
The finish is surprisingly smoky, after the nose and palate. Dry oak an sharp. Also a bit of greenness. Tree bark like. Straw and hay with some vanilla. Quite rich.

Now this is an interesting dram. It tastes, as with many Kavalans, much beyond it’s age, even though it’s quite sharp on the nose and the palate. The fruity flavors are really nice and not surprising, knowing these guys’ preferences. I like that they didn’t go for the far more predictable sherry casks that seem to win every award available.

Having said that, I do think this whisky falls in the category I usually find Kavalan in. It’s good, really good, but I don’t see myself drinking this on a regular basis. Add to that, that this whisky comes with a € 185 price tag, I’m not getting myself a bottle.

So, if you like Kavalan, get this one, pronto. If you’re really into that brand, you might want to know that this one is very much in line with the distillery’s products.

Another good pick by Bram and Floris of WhiskyNerds, just not entirely my cup of tea. You know, the same way I know Pink Floyd makes great music, but it’s just not the thing you enjoy listening to.

I'm very interested in booze, with a focus on whisky. I like to listen to loads of music and play lots of Magic: the Gathering, and board games too. I'm married to Anneke, have two daughters Ot and Cato, a son Moos and a cat called Kikker (which means Frog, in Dutch). I live in Krommenie, The Netherlands.
View all posts by Sjoerd de Haan-Kramer →
This entry was posted in - World Whisky, Kavalan and tagged 2006, Bourbon Cask, Cask Strength, Free Sample, Kavalan, Single Cask, Taiwan, WhiskyNerds, World Whisky. Bookmark the permalink.