So, since I’m spending shitloads of money on beer again. Or at least I was over the last couple of months, I decided to get something out of it except lots of enjoyment. So, after 2.5 years of absence, there’s a ‘Best beers of ….’ again.

This month has been rather crazy with lots of different brews, of widely varying quality. 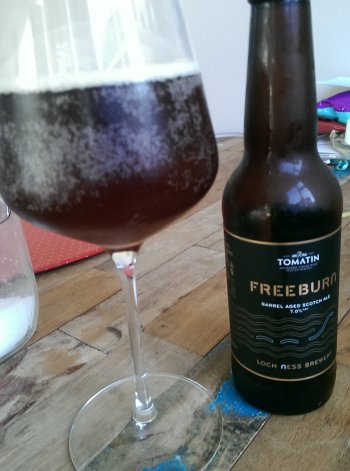 Freeburn, Loch Ness Brewery, 7%
YES. I ordered this early in the month and have been thoroughly enjoying it. It’s ridiculously awesome with lots of malty goodness and a gentle cask influence. My beer of the month!

Dark Sister, Brussels Beer Project, 6.66%
I believe this was a Black IPA? Which also means it was tasty but not exceptional. Else I’d have remembered it.

Spencer Trappist Ale, Spencer Brewery, 6.5%
One of the newer Trappist breweries. A lot of attention was given to this when it came out, but the beer itself is heavily styled after its Belgian counterparts. Therefore, there’s absolutely no reason to buy this if Belgian beers are cheaper. Utterly mediocre and far too expensive for it.

SmokieNess, Loch Ness Brewery, 5%
A reddish ale brewed by the guys at Loch Ness with one of their favorite bands, Smokie (?). I don’t know the band, but I really enjoyed the beer. Not exceptional, but thoroughly enjoyable. Recommended.

Braggot Brett 2014, De Molen, 8.5%
An intentionally infected beer, much like (AFAIK) Orval’s Trappist. Not sure what the angle was here, but I really, really didn’t like it.

Stouts, Porters, that kind of stuff:

I love IPAs. I was, however, looking for some new ones. Just to not drink Punk IPA all the time. These ones are great, and highly recommended:

And I had the Duvel Triple Hop 2016, which somehow is very popular but I just can’t seem to care about it. It is better than last year’s though. The Double Wide IPA by Boulevard Brewing Co. (8.5%) is nice but forgettable too. And forgettable American beer in Europe is just too expensive.

Most sour ales I had this month were from Alvinne. They seem to focus on the style, but they don’t make Gueuze. That results in, from my opinion, quite inferior beers in which the sweetness of the malt and wood have not been well integrated.

Oude Quetsche Tilquin (2014-2015), 6.4%
A random Gueuze I picked up last week and there’s nothing wrong with it. It also won’t sway you away from buying 3 Fonteinen or Cantillon, and that’s just as expensive.

Good, but just not for me:

Some beers are actually quite good, but somehow the style doesn’t sit well with me

2 Responses to Best beers of March