EDIT: I made a booboo on the title. I initially had this up as being distilled in 1988. It is, however, a decade younger than that, from 1998.

Mortlach has been gaining popularity and fame since Diageo revamped the packaging and upped the prices to ridiculous levels. The fun thing about this is that Mortlach is gaining that popularity mostly from the independent bottlers, since those bottles are affordable for mere mortals like you and I.

The Whisky Exchange, in their recent batch of single cask releases have included one, at a very decent age of 18 years old. It’s been finished in a sherry cask. There isn’t much more information, about the length of the finish or the type of sherry cask used.

EDIT: there is. The finish is 54 months. Which is pretty long, and it explains the intensity of it. See the rest of the post.

Whiskybase tells us that it used to be a couple of hogsheads that were finished in a butt, at least. Not an official ‘single cask’ according to the sometimes flexible rules of the Scotch Whisky Association, but I’ll roll with it! 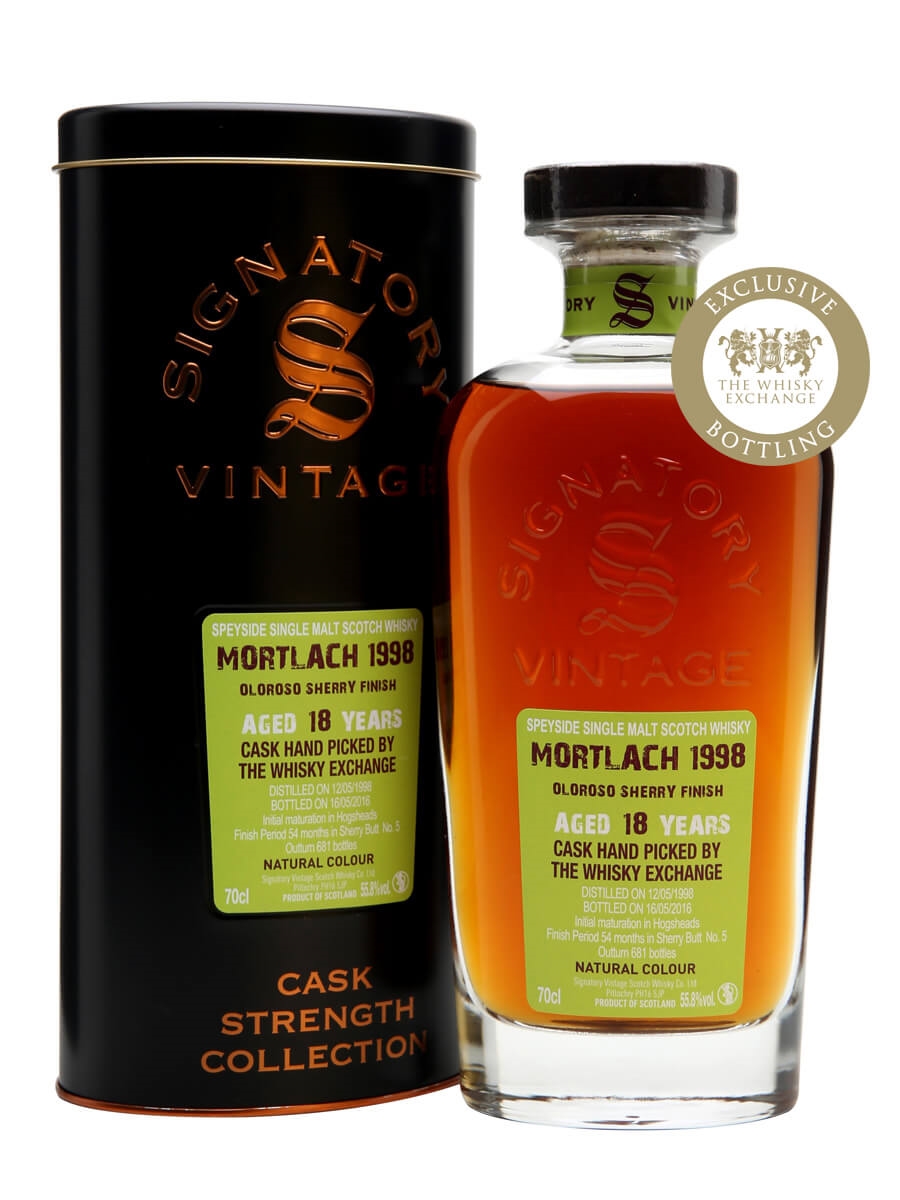 Sniff:
The nose is sharp. Very sharp. There’s loads of sherry so it sure was an active cask. Some straw and lots of fruit. Plums, nectarines, both with stones for bitterness. Some spiced cake and lots of dried fruit. Some clove and cinnamon.

Sip:
The palate is sharp too and very dry with tree bark and lots of bitter wood notes. Spicy with some fruit in the background. Cinnamon sticks (not the ground stuff) and other baking spices.Very warming.

Swallow:
The finish is meaty, with some marinade like hints. Still lots of oak and sharpness, but slightly different. Long, spicy and lots of fruit.

Dave Broom called it ‘A monster of a Mortlach’, and he’s absolutely spot on. This thing is a monster in every way, and I love it. The complexity is good, and the sharpness tells me it handles a drop of water very well, which gives it even more longevity in my book.

The fruit (both dried and fresh) stand up nicely to the oak, and the fact that it’s a finish isn’t overly noticable. It’s not thin in anyway. Highly recommended!

Thanks to TWE for the sample!

I'm very interested in booze, with a focus on whisky. I like to listen to loads of music and play lots of Magic: the Gathering, and board games too. I'm married to Anneke, have two daughters Ot and Cato, a son Moos and a cat called Kikker (which means Frog, in Dutch). I live in Krommenie, The Netherlands.
View all posts by Sjoerd de Haan-Kramer →
This entry was posted in Mortlach and tagged 1998, Cask Strength, Free Sample, Mortlach, Sherry Cask, Signatory, The Whisky Exchange. Bookmark the permalink.