This Rest & Be Thankful brand is a bit of a strange one. When they started bottling two years ago they got things riled up with some hugely overpriced Octomores. If I remember correctly those were twice as expensive as the already ridiculously expensive Octomore bottlings from Bruichladdich themselves.

However, after getting a bit of a bad rep for that they seem to have been turning things around with some very decently priced bottlings. This one is no exception. It also is my first encounter with the whisky itself, and not just the brand as a name in web shops. 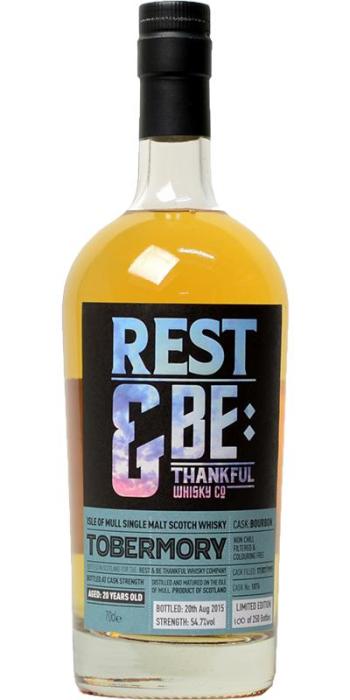 Sniff:
The nose starts sharp, with lots of barley at first. Some dry notes as well and a spiciness that my wife and I identified as mustard seed. Interesting stuff, with also some hints of both grass and sand.

Sip:
The palate starts sharp too, but mellows a little bit right away. Oak, grass, again the mustard seed. Lots of barley notes, but also the dryness I associate with the chaff of the grains. Dry and slightly syrupy.

Swallow:
The finish is rich, and the spiciness from earlier is a bit more generic now. Oaky and syrupy but not sweet. Quite a long finish.

This is not something I would call and easy sipper or an effortless dram. There are some interesting and curious flavors, that surprised me a little bit. Because of the spices and combined oak and grass I went for a highland dram and (randomly) picked Clynelish. Not sure why since I pretty much knew it wasn’t that, but I didn’t have a better guess either. Well, apart from ‘anything else’.

I did get 30 points for the age so I did get over 300 points this year. Only a sixth of the possible score. It got me to 53rd place, out of 71, so a pretty shit spot to end up in. I have no idea how to improve my game, except maybe to stop tasting so damn much and take more time with each dram. Do more verticals to get to know the ins and outs of a distillery would also help. That may be a resolution for 2017!

Also, Tobermory is a blind spot due to one bad experience in the beginning of my whisky drinking days. It’s silly, since ever since I’ve mostly had Tobermorys that were actually very good and I keep telling myself I should give this distillery more credit than I do.

Quite tempted to buy this one too. Just because it’s very good, and very different that things I know.

I'm very interested in booze, with a focus on whisky. I like to listen to loads of music and play lots of Magic: the Gathering, and board games too. I'm married to Anneke, have two daughters Ot and Cato, a son Moos and a cat called Kikker (which means Frog, in Dutch). I live in Krommenie, The Netherlands.
View all posts by Sjoerd de Haan-Kramer →
This entry was posted in Tobermory and tagged 1995, Blind Tasting Competition, Islands, Mull, Rest and be Thankful, Tobermory, Usquebaugh Society. Bookmark the permalink.