Since I’m trying to ‘pay my dues’ to the people who sent me samples over the last year or so, I just grabbed the one closest to me when I checked my cupboard. It just happened to be this Ledaig.

Ledaig it peated Tobermory, in much the same way that Port Charlotte is peated Bruichladdich and Longrow is (more) peated Springbank. I think it’s quite practical that they use a different brand name for it. Mostly because, apart from some indies occassionally mixing it up, it’s quite clear what to expect from a bottle when deciding what to buy.

Ledaig (and Tobermory) is a distillery that is not really on my radar. Ledaig as a brand is doing something about it and I’ve tried some really nice ones over the last two years, but somehow I never consider picking up a bottle except for a bottle share. Much the same can be said about Tobermory, but I’ve not tried many, ever. The final dram in the Blind Tasting Competition told me I was wrong about not trying Tobermory. 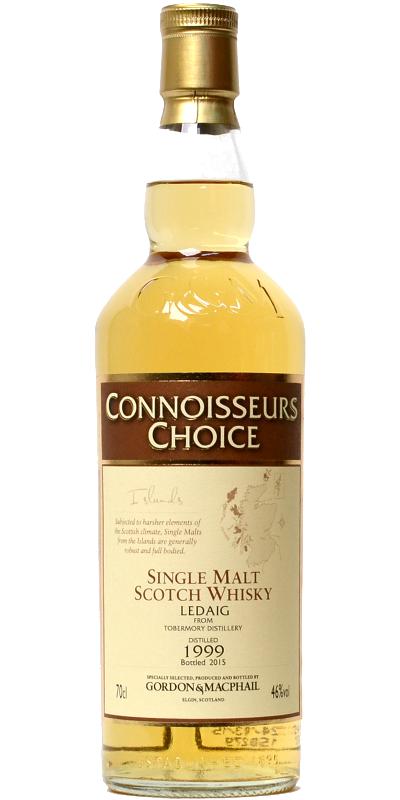 Sniff:
Lots of ashy smoke, and quite a clean whisky behind that. Lots of grass and straw. Dry oak. There is a certain minerality. Not unlike the irony taste (although now it’s the smell) of apples, or some slate like scent.

Sip:
The palate is quite course. There’s a rough, grainy feel to it that is not unlike how sand would taste if you’d just have the taste instead of the feel. Still, there’s a bit of dry white oak and lots of smoke. A wood smoke kind, instead of a peaty, earthy kind. Less irony, but a bit more focus on wood.

Swallow:
The finish is quite warming and simple, but the smokiness is very nice and it’s quite smooth.

Normally, bottlings with this profile from Ledaig come at a near 60% ABV and are scorching hot. Initially those put me off Ledaig for a long while. Luckily nowadays these gentler bottlings are around too. It’s a far better whisky for drinking.

Having said that, this whisky is a bit of two things:
On one hand it’s a nice drinker for someone who wants something else than an Islay peat bomb, with a different flavor profile. On the other hand it’s also a drinking whisky. By that I mean there’s nothing really wrong with it, but it’s also not very complex. Good, but not multidimensional and I if you’re looking for something to draw your attention, this one isn’t it.

Thanks to Gordon & MacPhail for sending a sample!

I'm very interested in booze, with a focus on whisky. I like to listen to loads of music and play lots of Magic: the Gathering, and board games too. I'm married to Anneke, have two daughters Ot and Cato, a son Moos and a cat called Kikker (which means Frog, in Dutch). I live in Krommenie, The Netherlands.
View all posts by Sjoerd de Haan-Kramer →
This entry was posted in Ledaig, Tobermory and tagged 1999, Bourbon Cask, Connoisseur's Choice, Free Sample, Gordon & MacPhail, Islands, Isle of Mull, Ledaig, Mull, Tobermory. Bookmark the permalink.