Henry Jeffreys is a booze writer who produces several columns, for newspapers and magazines, mostly about wine. In his latest book, published through ‘the kickstarter for books’ Unbound he dives into the important role booze plays in the history of England. Or maybe the other way around. 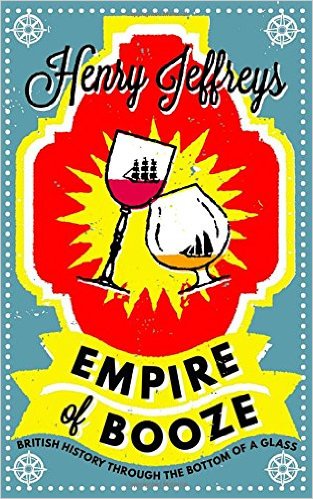 The history of the United Kingdom is entwined with a lot of different types of booze throughout history. From Champagne, Claret, Madeira, Marsala, Port Wine, Sherry, Gin, Rum, Beer, Cider and Whisky, every topic is covered in this book.

While this could result in a rather boring recount of how a certain type booze was created or brought to prominence, the book is riddled with interesting anecdotes, fun facts and opinions from producers or the writer.

My main problem with Unbound, while appreciating what they’re doing, is that the books tend to be quite expensive and I have the feeling the proof reading isn’t done as carefully. While this might not stand out to everybody, there were some references in regard to Dutch history that were written wrongly:

Back to the book. While I don’t hold an interest in all kinds of drinks, this book made me want to drink. It made me more aware of all kinds of different types and subtypes of boozes I am familiar with, and it rekindled my drive to try as many different things as possible.

Also, the chapters themselves are not too historic. They are not too political and not too long. This means that every chapter is a self contained unit of interesting information. There are all kinds of interesting tidbits that can be used in future tastings I’m organizing for others and a better understanding of how things came to be.

The short conclusion can be: England picked a lot of fights over the last millennium and therefore had to get booze from elsewhere…

What I absolutely loved about this book is that it is not just statistical information, but mostly information gotten from personal connections, with a bit of a personal feel to it. Also, the fact that mr. Jeffreys is not shy with his opinion makes this book all the more readable and fun!

“There’s a stench of rotting vegetation combined with sulfur; it’s like opening a vent to a tropical island hell.”

I laughed out loud. Literally.

I'm very interested in booze, with a focus on whisky. I like to listen to loads of music and play lots of Magic: the Gathering, and board games too. I'm married to Anneke, have two daughters Ot and Cato, a son Moos and a cat called Kikker (which means Frog, in Dutch). I live in Krommenie, The Netherlands.
View all posts by Sjoerd de Haan-Kramer →
This entry was posted in - Book and tagged Book review, Empire of Booze, Henry Jeffreys, Unbound, World of Booze. Bookmark the permalink.