A sample of this at-least-50 years old whisky was sent to my by Master of Malt some months ago. The fact that I’m only blogging about it now is one of the reasons I decided to focus a bit more on commercial samples. As in, those companies sent me stuff for reviewing, and I fail to do that. It’s like a bad trade for them, instead of the good one it should be for both parties involved.

So, this is a blended whisky made of old, old whiskies. Of course there’s no recipe given but the fact that every component is over half a century old eliminates a lot of distilleries, but it also opens up some other possibilities.

Of course, a whisky like this is far from free, but compared to single malts in this age bracket it’s on the cheap side. Shockingly, the cheap side means that there’s only three digits before the decimals start. It comes in at 700 Euros. 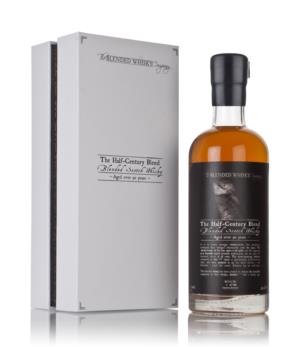 Sniff:
It starts off with the gentle sweetness of very old grain whisky, but there is something else too. Soft oak with some light spices. Old mango and peaches. Also more resinous notes and thyme. Some hints of copper, chalk and peppermint.

Sip:
The palate is slightly oily, but also a dryness of grain and grist. The soft oak is more dry here, more musty. Baking spices with pepper, nutmeg and cinnamon. Lots of flavors, but very wood driven.

Swallow:
The finish is slighty more ethereal, maybe because of the higher strength. Full and long. Oak, grain and a hint of coconut.

This whisky has gotten rave reviews everywhere, with 90 points from Whiskyfun to top it off. This is very well deserved. It’s a tremendous whisky that delivers far more than I expected. Generally when I get whiskies of this age there’s a sort of genericness to them. The oak has influenced the spirit so heavily that it’s delicious but it’s hard to recognize distillery character.

While this is a blend it’s quite impossible to decipher where it comes from based on flavor anyway, it does taste more complex than ‘just oak’.

Summarizing, this is a stunning whisky and it does everything right. The age has tamed it but it’s still quite feisty.

The Half-Century Blend, 45.5%, The Blended Whisky Company. Available through Master of Malt for just under 700 Euros.

Thanks to The Blended Whisky Co. for sending a sample. Much obliged!

I'm very interested in booze, with a focus on whisky. I like to listen to loads of music and play lots of Magic: the Gathering, and board games too. I'm married to Anneke, have two daughters Ot and Cato, a son Moos and a cat called Kikker (which means Frog, in Dutch). I live in Krommenie, The Netherlands.
View all posts by Sjoerd de Haan-Kramer →
This entry was posted in - Blended Whisky and tagged Blended Whisky, Blended Whisky Co., Free Sample, Half Century Blend, Master of Malt. Bookmark the permalink.