Benrinnes is one of those Diageo distilleries that isn’t bottled as a single malt often. Apart from some Flora & Fauna releases and the occassional Premium Edition, you have to turn to independent bottlers. Even those guys don’t have too many of them. They’re not exactly rare, but you don’t find them on every street corner.

About 11 years ago, when I got more and more into drinking ‘luxury’ whisky, Gordon & MacPhail released a black as coal Benrinnes in their Reserve series. It was a special release for The Netherlands and it sat on the shelf at my local dealer. I had been eye-balling it for quite a while when my wife decided to give the bottle to me.

Anyway, it was a stellar whisky, and when I got this sample in I had another bit of Benrinnes to drink that had been very, very heavily sherried. Quite dark, but from a refill butt, and a couple of  years younger. 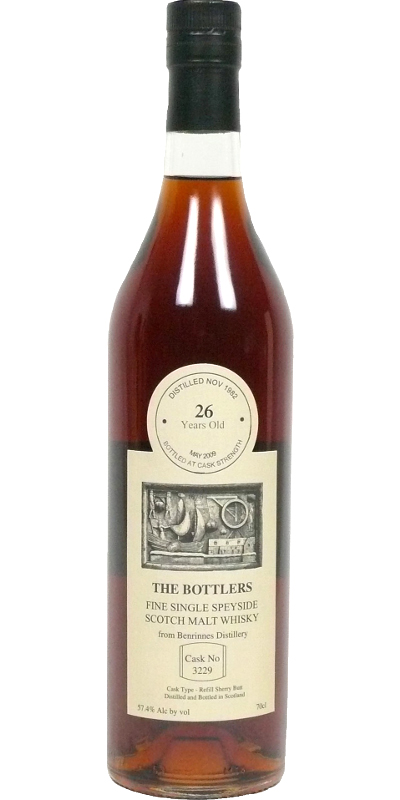 Sniff:
Slightly dusty with spices and dried fruit. In short, sherry. Spiced cake with a bit of mint. Almost Japanese in style. You know, that rich plum wine and huge oak notes. Incredibly rich, but the mint gives a bit of crispness. It cuts it, so to say. Also some pine notes.

Sip:
The palate is incredibly dry and quite sharp. Lots of oak, lots of sherry and some chili heat. Dried fruits and later that mint comes back too. Some red fruits, cherries and cream.

Swallow:
The finish is full and rich. Again, this has everything. Oak, fruits, spices, mint crispness, sherry richness. And again, I find this quite Karuizawa like.

Well, this is bloody awesome. There no such thing as balance, but it’s just incredibly good. Especially if you’re into Japanese whisky. The sherry is massive, and all the derived flavors of (what I’m guessing) European oak, are too. Vast amounts of oak, dried fruits, baking spices. The mint note is incredibly well placed too, otherwise this would have scored much lower.

Of course, a bottle of this stuff has now risen in popularity so it costs you some 500 bucks to get it. Unfortunately, but with this kind of whisky, I can even understand it rising in price and popularity, but 500 bucks is a ridiculous amount of money for a bottle of hooch. Even one as good as this.

I'm very interested in booze, with a focus on whisky. I like to listen to loads of music and play lots of Magic: the Gathering, and board games too. I'm married to Anneke, have two daughters Ot and Cato, a son Moos and a cat called Kikker (which means Frog, in Dutch). I live in Krommenie, The Netherlands.
View all posts by Sjoerd de Haan-Kramer →
This entry was posted in Benrinnes and tagged 1982, Benrinnes, Sherry casks, Single Cask, Speyside, The Bottlers. Bookmark the permalink.