Rotation 1978 means that it was bottled in that year. Which also means it was distilled in 1966 (and possibly before). So, we’re talking about a 1966 Lagavulin here.

Bottles like this come by in auction occasionally, but they always fetch upwards of a 1000 euros when they do. Of course this is way out of my league, but a whisky buddy that is also part of the Usquebaugh Society and whom I meet at tastings at Whiskyslijterij De Koning every now and then (MvB) was kind enough to give me a sample some years ago.

I always kept it around for a special occasion, but after a while I started realizing that drinking a 1966 Lagavulin is special enough and doesn’t need any extra flair… 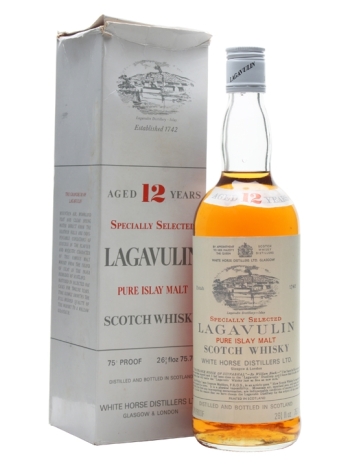 Sniff:
There’s a very definite smokiness and some sherry influence that’s very different to the current style. All of it feels a lot more oily, a lot richer and more full. It’s not too heavy though (which suits the average style of the 1970s fine). Some ash, leaves, sand and brine. Somehow I also got a whiff of peanut husks/peels. Old orange, Maggi, soy sauce and that kind of stuff.

Sip:
The palate moves away a bit and shows more dryness, more oak. It’s rather earthy and a touch of salinity. Again, the soup stock and seasonings, soy sauce. Also the typical (for Lagavulin) of dried orange slices with hints of sherry. Very rich, very very gorgeous.

Swallow:
The finish is slightly more salty and briny again. More sea like, more like being at the distillery. Oak, tarry ropes and old boats. Sand and slightly nutty.

I think I tried this dram two months ago (there’s quite the backlog of tasting notes…) and I doubt this whisky is going to be topped this year. It’s an insanely good whisky that shows why people are going ballistic for older bottlings of Islay whiskies. Of course, there’s older and there’s OLDER, like this one. Stunning, stunning whisky.

What I think is pretty awesome is that the slightly sherried and orangy character of current day Lagavulin 16 is also present in this one, but the changes in the process show very clearly. The biggest differences in oiliness, texture and sheer ‘weight’ are (as far as I know) contributable to changes in the distilling process (fermentation time, yeast strain, barley strain, distillation consistency and speed) and not necessarily to the casks used.

It is such a joy to be able to taste these things, even if it is just a once in a lifetime experience. Now let’s hope this doesn’t ruin other Lagavulin for me 😉

I'm very interested in booze, with a focus on whisky. I like to listen to loads of music and play lots of Magic: the Gathering, and board games too. I'm married to Anneke, have two daughters Ot and Cato, a son Moos and a cat called Kikker (which means Frog, in Dutch). I live in Krommenie, The Netherlands.
View all posts by Sjoerd de Haan-Kramer →
This entry was posted in Lagavulin and tagged Islay, Lagavulin, White Horse. Bookmark the permalink.