So, yet another sample sent to me from The Whisky Exchange. It’s the same as with everything in London: I should visit it sometime. Somehow, London seems elusive to me. It’s been on my wishlist for years, but it’s never become a reality yet. Maybe because traveling on my own is not something that happens on a regular basis (as in, just once, ever) and my wife would like to visit London in a slightly different way than I envision when think ing about all the whisky and beer (and their respective communities) I’d like to see and visit…

Anyway, another sample. A 22 year old Highland Park is quite a promising thing. An independent bottling, since it would otherwise have cost about 400 euros or so, and now it’s only (“only”) 150 pounds. Honestly, with the way things are going, quite a fair price.

I don’t try many Highland Park whiskies nowadays. Most of the original bottlings are coming out in all kinds of weird series with vast wooden cases or scaffolds or whatever. I generally try to stay clear of whiskies like that since I don’t really like the idea of paying a lump sum for packaging. Also, for a lot of releases the whisky doesn’t justify the price.

I’m not trying to give the Orkney distillery a lot of flack, since the quality of their regular releases is insanely high, and I know they make a lot of awesome whisky. It’s just that my preference is different to what is popular nowadays.

Aaaaaand I just realize I sounds like I’m 80 years old.

Let’s taste some whisky instead. 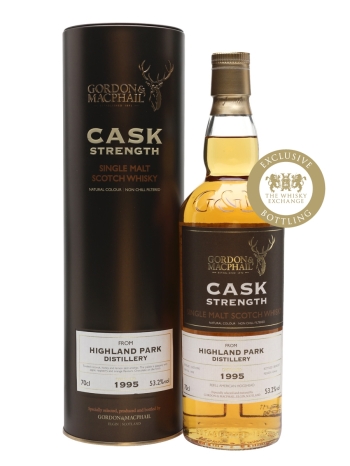 It’s quite robust on the nose, with a slight salty edge. Some minerals, oak and barley. Some pastry and pear for sweeter notes. Star fruit, chalk and a very light whiff of smoke. A little bit coarse, and this combination of scents makes me think of rocky cliffs and wind and such. You know, Orkney.

Sip:
More thick and creamy in texture than the nose made me expect. Also slightly sweeter. Soy milk, and dry oak. Yellow fruits and barley. Star fruit, apple, pear skin. It’s getting dryer as you let it swim. There is some staleness, as dusty attics can be, with a whiff of smoke. A complex dram, this.

Swallow:
The finish is very dry again, with a focus on barley and oak at first. Quite heavy and wintry. More minerals and marram grass.

If you think the above sounds lovely in a whisky, I agree with you. This is a cracking dram, with a lot of depth and flavor. The palate is slightly different from the nose, but still rather balanced. And what helps is that this is the exact style of whisky that I enjoy. A lot of flavors, of which a lot are distillate driven. Some cask influence and the dram itself tasting rather mature. All good things.

Regarding the score, I was on the fence between 89 and 90 points, but I slightly prefer the Cadenhead’s one that I reviewed a while ago, so this one can only be 89 points… Maybe I should have given that 91.

But it sure is good, and the 150 quid price tag is rather justifiable.

Thanks for the sample, TWE!

I'm very interested in booze, with a focus on whisky. I like to listen to loads of music and play lots of Magic: the Gathering, and board games too. I'm married to Anneke, have two daughters Ot and Cato, a son Moos and a cat called Kikker (which means Frog, in Dutch). I live in Krommenie, The Netherlands.
View all posts by Sjoerd de Haan-Kramer →
This entry was posted in Highland Park and tagged 1995, Free Sample, Gordon & MacPhail, HIghland Park, Islands, Kirkwall, Orkney, The Whisky Exchange. Bookmark the permalink.