Old Pulteney is an underrated distillery, in most cases. People now know that older versions, like the 1990 or 1989 that won Jim Murray’s Best Whisky thingy, are good, but there’s a lot more that’s good from the Wick distillery.

I dare say that even the regular 12 year old is a rather cracking dram. Especially since you can sometimes get it at a discount for about 25 to 30 euros. That’s awesome value for money right there.

A little while ago The Whisky Exchange released this 2004 one. Obviously matured in a sherry cask, a butt most likeley since there are over 600 bottles drawn from the cask. When I got an email announcing the imminent delivery of a sample of it, the bottle had already sold out.

You know, a good distillery, plus cask strength, plus single cask, plus sherry means quick sales, generally. This was no exception, and after tasting it, I understand why. 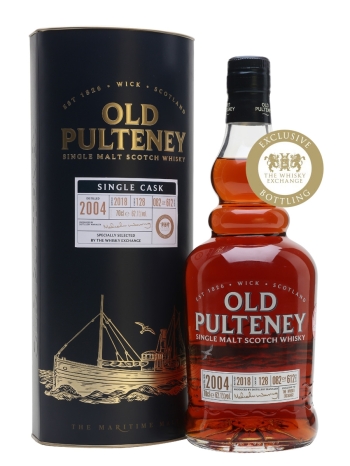 Sniff:
There’s sherry on all fronts. Fruit, dry and old oak, and spices. It’s a dry whisky, rather coastal on the nose. Hints of salt water, flint and slate. Lots of peaches and plums, apricot jam and even cigars and tobacco leaves.

Sip:
The palate is unsurprisingly sharp, but tastes more like a high fifties ABV than over 60 percent on arrival. It does start biting slowly and lightly smashes your palate. Lots of sherry, some oak, lots of fruit. Apricot jam, plum jam, slightly bitter and salty. Rather sweet, as indicated by the jams.

Swallow:
Generally, whiskies like this mellow quickly on the finish, but not this one. This one keeps biting and kicking for a while. It’s long with lots of fruit and sherry. The coastal notes stay present with salt and slate. Rather heavy with cigars and leather. Lots of deep and big flavors.

Summarizing, this is a biter. It’s very strong, but not nonsensically strong. The fruit and dryness of the sherry shine through throughout tasting the whisky and that’s really gorgeous on top of Old Pulteney’s coastal spirit. There’s a lot going on, and even at full strength you get a lot of different flavors. I expect this one can handle a drop of water, though.

In short, it’s right up my alley, and I should pay more attention to the distillery in general.

I'm very interested in booze, with a focus on whisky. I like to listen to loads of music and play lots of Magic: the Gathering, and board games too. I'm married to Anneke, have two daughters Ot and Cato, a son Moos and a cat called Kikker (which means Frog, in Dutch). I live in Krommenie, The Netherlands.
View all posts by Sjoerd de Haan-Kramer →
This entry was posted in Old Pulteney and tagged 2004, Free Sample, Highlands, Old Pulteney, Sherry Cask, The Whisky Exchange, Wick. Bookmark the permalink.