To keep the posts flowing, I’ve come to realize that guest posts are a helpful thing. If I’m not mistaken, it has only happened once before, in eight years time. Today sees the second one.

My friend Shai, sometimes mentioned on the blog in the more anonymous ‘DSA’ form is an American living in Vienna. He flies around a lot for work and in a more private setting. Because of that, he sometimes has the chance to visit a whisky lounge in this or that airport. Which he then reviews.

I spend a lot of time in airport lounges, and I thought that whisky drinkers might want to know what their best options are in case they find themselves in a similar situation. I previously wrote about the new whisky bar in Zurich airport.

What: Lufthansa First Class Terminal
Where: separate building near a taxi stand, follow signs for First Class Terminal
How to get there: arrive directly. Or, if on a layover, you can exit the airport and walk a few hundred meters. However, the best way to get there by far is by Porsche- on really long layovers, Lufthansa will give you the keys to a 911 for three hours to drive like a nutjob on the autobahn. 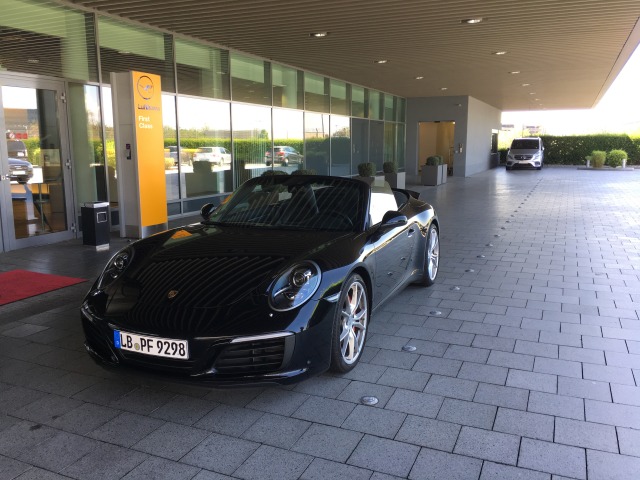 Who has access: Lufthansa/Swiss First Class (connecting to or from), Miles and More HON.

After a valet takes the keys to your Porsche, you are assigned a personal assistant. He/she then escorts you through a private security screening, and takes your passport to the immigration authorities (who you never actually see, your passport simply reappears stamped). That’s it- 30 seconds, and you are free to enjoy the lounge’s whisky bounty. No need to keep track of time, your assistant will come get you when it’s time to board.

Even in first class lounges such as this, the selection is usually limited to Johnny Walker Blue Label and other cheaper, uninteresting blends. Not here! Gaze upon the whisky bounteousness: 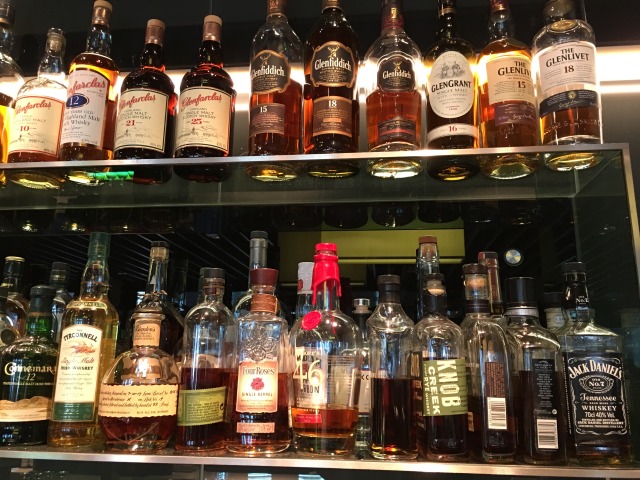 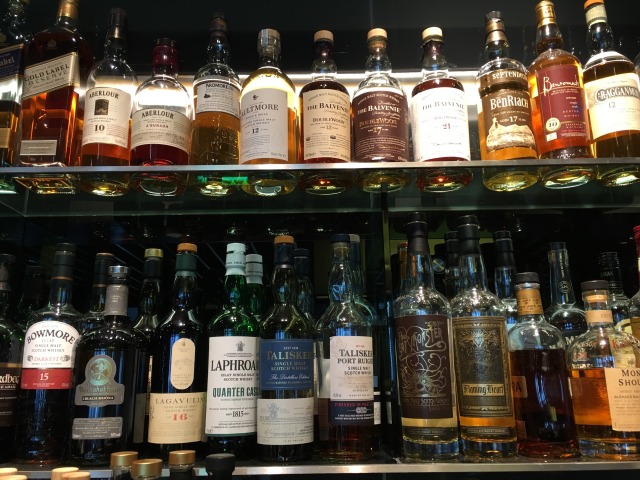 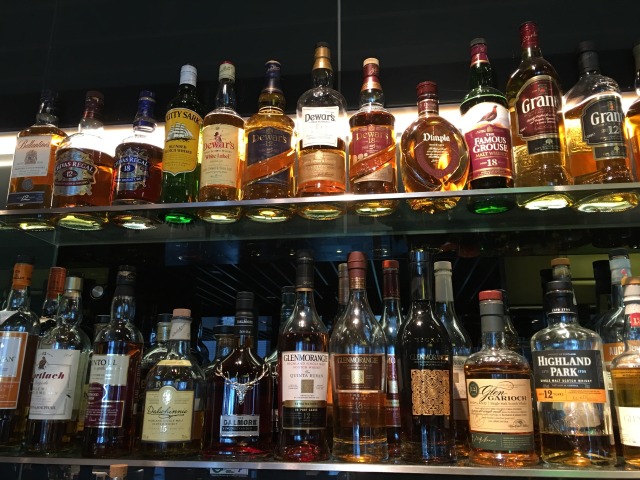 No, you won’t find any single cask Springbanks, but among regular production whisky, there are many fine examples on offer. I noticed quite a few bottles I love: Glengarioch 12, Highland Park 12 and 18, most of the Compass Box line, a fair amount of Glenfarclas, and many more. Too bad I only had 3 hours!

There is also a cigar lounge, which has its own small bar. This had a few bottles not found in the main bar, including Hibiki Harmony and my beloved Delamain Pale and Dry. You can bring in whisky from the main bar if these don’t meet your approval. And of course, you won’t find whisky served in tumblers here. Spiegelau nosing glasses are provided, as they are in Zurich.

I retired to the cigar lounge for a nice Hoyo de Monterrey Epicure No. 2, accompanied first by Glenmorangie Signet. Signet is on my list of whiskies that I love that I would never pay for, as it’s a malty crowd pleaser priced like a fine old single cask. I had one more NAS dalliance in the form of the Hibiki, which I found full of tannins and sweetness. Unpleasant, and no minerally “river rocks” flavor that I am used to from the 17 year old. I spent the rest of the afternoon with my old friend Glenfarclas 25, which I took with me everywhere- even the bathtub.

Now, I know what you’re thinking. “Screw this guy, I’m not spending 8000 EUR on a plane ticket so I can drink Glenfarclas 25 year old.” And you’re right, I am not advocating buying a cash first class fare just to get access to good booze.  The simple fact, however, is that this lounge is really quite accessible.  First, if you fly a ton for work and have the highest Lufthansa status, you can access all the First Class ground infrastructure even if flying in the last row next to the toilets.  Second, anyone with some Avianca, Air Canada, or United miles can book a Lufthansa First Class itinerary for a song (I’ve excluded worse deals- ironically, it’s never worth it to book with Lufthansa miles). On this itinerary, I paid only about $19 in taxes, which could have been as high as $240 had I used Aegean miles. I’m sure you’ll agree that even $240 is not bad for First Class!  And for those trying to figure out which routes have the best amenities, whisky drinkers could do a lot worse than Lufthansa.

I'm very interested in booze, with a focus on whisky. I like to listen to loads of music and play lots of Magic: the Gathering, and board games too. I'm married to Anneke, have two daughters Ot and Cato, a son Moos and a cat called Kikker (which means Frog, in Dutch). I live in Krommenie, The Netherlands.
View all posts by Sjoerd de Haan-Kramer →
This entry was posted in - Airport Whisky Lounge, Glenmorangie, Guest Post and tagged Frankfurt, Glenmorangie, Guest Post, Lufthansa, Whisky Lounge. Bookmark the permalink.