Reservoir Distillery is one of the thousands of micro distilleries that have popped up in the United States over the last decade or so. A lot of them are forgettable at best, but some of them are doing some very interesting things.

I remember the single malts of Westland Distillery fondly, and I have a soft spot for the rough-and-tumble bourbons and ryes from FEW. There are some distilleries that (I think) produce utter shite, like Lost Spirits. Some do a bit of both, like St. George in Alameda (great gins, liqueurs and all, but their single malt is horrible).

Apart from there being interesting stuff from some American distilleries, this batch of four different ones peaked my interest because it is an educational batch. When reading about American whiskey, you always hear things about the mash bill, which grains they use and to which ratio. However, it is very hard to compare what grain does what to a whiskey.

That’s where this series comes in. Four whiskeys from Reservoir Distillery, with four different recipes. One Wheat, one Corn, one Rye and a bourbon that mixes the grains. The three non-bourbon whiskeys are all 100% of the grain that’s on the label. 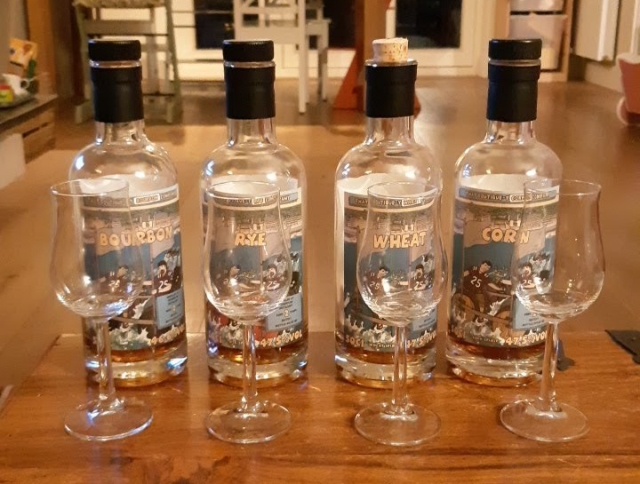 All four of them are two years old and all non-bourbon ones are bottled at 47.5% ABV. Sounds like a good thing to sit down for and do some educational tasting, right?

Sniff: Young bourbon, that’s not yet overly mellow. Lots of fresh oak, with dry wood spices and some rye.

Sip: Dry and surprisingly sharp. The youth and dry oak add lots of spiciness, which gets a bit dominant. Some corn sweetness, but with lots of spices, dry wheat and some chili pepper.

Swallow: Rather crisp because of the spices and how ‘green’ the whiskey still is. Very summery, but intense.

Sniff: Slightly more gentle on the nose, with a more mellow oak. The spices are present, but more fresh and minty. A touch of vanilla, basil and some foresty green things like moss and ferns.

Sip: Dry, spicy and bold. Quite some peppery notes. Both black and red, with lots of dry oak. It’s a bit syrupy compared to the bourbon.

Swallow: Some strange notes, like fresh oak, slightly spirity. Rather ‘different’ than expected.

Sip: Very gentle with, later, some peppery heat. Dryness, without a lot of flavor to back it up. Some oak, some spices, but all dialed back.

Swallow: Without more flavorsome grain to back it, it’s a bit shallow. Smooth, but also more generic.

Sniff: Sweeter and slightly more focused on chemical notes. It’s getting some light roasty notes. Sweet with some spicy

Sip: Dry and sharp. Rough stuff, compared to the others, but lots of flavors.

Swallow: Dry here too, and intense with sweet corn, fresh oak and pastry. Rather long, oaky and young, in a good way.

Well, this was interesting. Personally, I had high hopes for the rye whiskey since I generally like rye whiskey a lot. This one didn’t exactly disappoint, but it didn’t do more than expected either. The bourbon I thought was a very good one, especially at just two years old.

Where it got really interesting was with the Wheat and Corn whiskeys. Both styles are not the most generic ones, although with W.L. Weller’s reputation (a high wheat bourbon) I had high hopes for that one, and it fell rather flat. Wheat does give a lot of dryness to a whiskey, but in this case it didn’t offer much else.

The Corn Whiskey did, though. I didn’t expect much of that, somehow. Normally I think of Corn Whiskey as the most generic of the grains used in bourbon, since it’s always spiced up with other stuff to make it good. Also, the few corn whiskeys that I’ve tried over the years didn’t help the case much either (Hirsch and Platte Valley come to mind). This one is pretty rad, which is great!

All of these whiskeys are available through Master of Malt, for about 55 pounds each. I bought the bottles to do a bottle-share.

I'm very interested in booze, with a focus on whisky. I like to listen to loads of music and play lots of Magic: the Gathering, and board games too. I'm married to Anneke, have two daughters Ot and Cato, a son Moos and a cat called Kikker (which means Frog, in Dutch). I live in Krommenie, The Netherlands.
View all posts by Sjoerd de Haan-Kramer →
This entry was posted in - American Whiskey, - Bourbon, - Corn Whiskey, - Rye Whiskey, - Wheat Whiskey, Reservoir and tagged Bourbon, Corn Whiskey, Reservoir Distillery, Rye Whiskey, That Boutique-y Whisky Company, USA, Wheat Whiskey. Bookmark the permalink.