Sometimes you get your hands on a very strange and sort of unique sample. In this case it’s a very old Suntory from the 1960. From back in the days when Japanese whisky was anything but popular, not even in Japan.

Nowadays things are different and, generally speaking, affordable Japanese whiskies are pretty shit at the moment. Except Nikka from the Barrel. But most of the others under € 80 or so are mostly those newish blends from pretty obscure producers. I’ve tried a few, but I’ve not found them to be to my liking.

Also, when a Karuizawa or so pops up on auction sites or in shops (when bought from a collection) it’s in the thousands of Euros. These are good though…

Now then, the Suntory Royal Special Reserve from the 1960s. To celebrate the distillery’s 60th anniversary they released this whisky in the 1960s. It’s a blended whisky, which isn’t a simple story in Japan. It might mean they blended it from different Suntory whiskies, or from different distilleries. Generally they produce a variety of styles per distillery in the land of the rising sun. 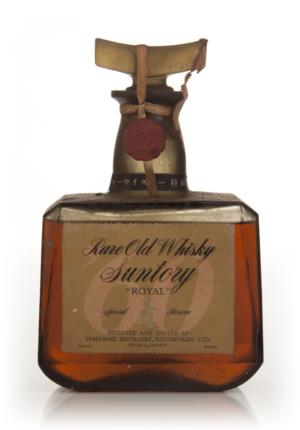 Sniff:
A whiff of OBE, with some charcoal, soot and barley. Lots of bitter oak. Very atypical with (probably) a lot of Mizunara. Some plum stones. Thick dried fruits, dates, plums.

Sip:
Very dry and oaky. Even a bit harsh for what it is. It gets a bit more fruity with prunes, dates and some raisin-twig-bitterness. A very typical woodiness.

Swallow:
The finish is much more gentle. Lots of oak, a hint of barley. The fruitiness is largely gone, and is replaced by a hint of sulphury vegetables.

While this is a very interesting whisky that’s not insanely good, it’s not very bad either. So, good stuff that’s good for a try. I doubt I’d finish a bottle quickly, if I had it, though.

I'm very interested in booze, with a focus on whisky. I like to listen to loads of music and play lots of Magic: the Gathering, and board games too. I'm married to Anneke, have two daughters Ot and Cato, a son Moos and a cat called Kikker (which means Frog, in Dutch). I live in Krommenie, The Netherlands.
View all posts by Sjoerd de Haan-Kramer →
This entry was posted in - Blended Whisky, - Japanese Whisky, Suntory and tagged Blended Whisky, Japanese Whisky, Suntory. Bookmark the permalink.