It’s not been two weeks since I did the previous review of a WhiskyNerds bottling. That Lagavulin 21 was amazing, and hot on the heels of that one comes a fresh sherry matured, 23 year old Springbank.

Their Lagavulin scoreed 93 points here, and the Springbank they did at the tail end of last year got 92 points. By now these guys have such a reputation that their last two bottlings sold out before they were in the shops.

With a € 1300+ Euro Lagavulin that’s not a bad thing, but this Springbank I would have loved to put on my shelf, even if it was only a seventh of a bottle through a bottle share. 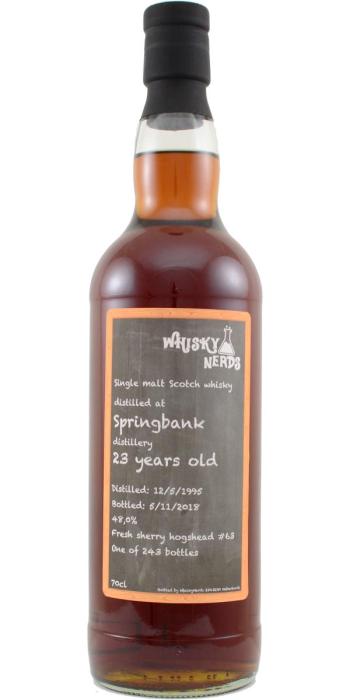 Sniff:
Very old fashioned style sherry. If I didn’t know any better I’d say this could be that slightly sooty style of 1960s Strathisla that’s so amazing. Funky with a whiff of overripe mango, pine needles and resin, and a hint of Maggi liquid seasoning. Some oily concrete, like the flooring in a car workshop, with berries. Strange as it is.

Swallow:
A silky smooth finish with dark chocolate, Maggi and resin. A slight crisp note of menthol with the ashy addition of cigarrette ash. Drying with oak, dunnage-warehouse-soil, and engine oil. Sandalwood and sour cherries.

This is yet another A. MA. ZING whisky. I am absolutely in love with this. It does everything right and it goes full on the complex sherry and the dirty notes that Springbank is so loved for.

I wouldn’t say this is a typical Springbank, although the style of ‘dirtiness’ is typical, but overall this reminds me more of 1960 Strathisla and some older Karuizawas. Stunning whisky, and a shame it’s gone.

Even though € 350 for a bottle of whisky is an insane amount, I can imagine this being worth it.

Sample provided by the WhiskyNerds. Much obliged!

I'm very interested in booze, with a focus on whisky. I like to listen to loads of music and play lots of Magic: the Gathering, and board games too. I'm married to Anneke, have two daughters Ot and Cato, a son Moos and a cat called Kikker (which means Frog, in Dutch). I live in Krommenie, The Netherlands.
View all posts by Sjoerd de Haan-Kramer →
This entry was posted in Springbank and tagged 1995, Campbeltown, Free Sample, Sherry Cask, Springbank, WhiskyNerds. Bookmark the permalink.