Normally I’d be busy writing about the best whisky of the year in the days between Christmas and New Year’s. Not only the best whisky, but also the best records I found, the best beer and other booze. I’d also be making a to-do list for next year and many other things thirty-something dudes nowadays do.

However, this December has been mental as you might have noticed by the complete lack of posts regarding the Usquebaugh Society’s Blind Tasting Competition. This year, I didn’t really get around to it, so there’s still eight of the eighteen samples waiting to be tasted, and of the ones I did try some were too late, some I forgot to fill in and only about four or five were actual guesses. Strangely, I didn’t even end up last.

What I AM doing right now is writing about yet another whisky I bought last year, and a good one it is!

During spring, it’s become tradition to go camping with a group of friends. We’ve known each other for about 16 years and we’ve been doing weekends away for about a decade, maybe more. Three years ago we added a weekend of camping so we could bring the kids as well (the other weekend is without kids). The camping we went to thusfar is in Schijndel, which is pretty close to Sint Oedenrode, where The Old Pipe is located. Of course, during such a weekend you need proper booze, so a proper bottle shop is high on the ‘to visit list’. Last time, I bought this bottle of Arran. 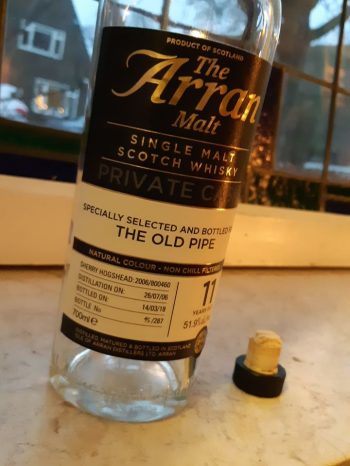 Sip:
Fairly gentle for its ABV. A syrupy texture, with sweetness that builds to a bit of a peppery heat. Lots of dried fruits. Dates, peaches, plums, apricots. Big flavors. A hint of apple and iron from Arran’s spirit.

Swallow:
The baking spices come right back. Some blown out candles, lots of fruit and sweetness. The heat lingers at a very warming and comfortable level.

Me, and everyone I know who tried it love this bottle. I always love it when a shop that’s quite out of the way make an effort to lure people in with things only they sell. Luckily, in this case that thing is a very tasty thing. This is a cracking Arran that has their spirit shine through all the flavors the cask has imparted.

It’s a complex dram, with lots of things to discover, and a very well balanced one at that. I absolutely love it. Also, the € 65 for a bottle is a steal for whisky of this quality.

I'm very interested in booze, with a focus on whisky. I like to listen to loads of music and play lots of Magic: the Gathering, and board games too. I'm married to Anneke, have two daughters Ot and Cato, a son Moos and a cat called Kikker (which means Frog, in Dutch). I live in Krommenie, The Netherlands.
View all posts by Sjoerd de Haan-Kramer →
This entry was posted in Arran and tagged 2006, Arran, Islands, Isle of Arran, Private Cask, Sherry Cask, The Old Pipe. Bookmark the permalink.