Or, Old Perpendicular according to The Whisky Sponge. I tried to do some research into old and new perpendicularity, but I couldn’t find much differences. I had to give up at some point so there’s no actual result there.

Not perpendicular at all

The third whisky of the evening was the signal that we were halfway. Normally a Twitter Tasting of four whiskies lasts about an hour or so. We were already an hour in and I think that signals how thrilled people were thusfar. I have to admit, this was turning out to be quite a nice event! 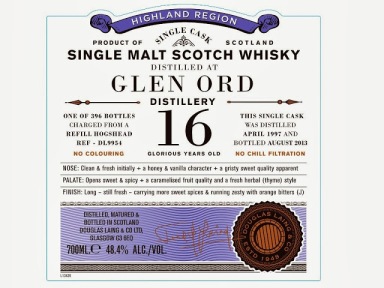 Sniff:
Cheese, the yellow Dutch kind. A bit spirity in a way that you get some distillery character, not as in a lack of maturation. The crust from cheese to be more specific about that. Some basalt or slate, a hint of diesel. Rather earthy, with moldy walnut, barley and banana.

Swallow:
Oak and green fruit, with a gin-like spiritiness. Some feinty machine oil.

It turned out to be a Glen Ord whisky, at 16 years old and again bottled at 48.4%. This, I admitted right away is the most full and complex Glen Ord I’ve ever tried. Mostly when you get Glen Ord, if you ever do so, you find not so interesting whiskies that have a fairly simple combination of flavours. There aren’t many independent bottlings out there since not many people find the distillery that interesting. That is, if stuff like this comes out more often, it would be nice!

I like the combination of gin-like spiritiness, feinty diesel and light fruitiness of apples. For some reason that’s a great pack of flavours. I don’t have a clue what the price is going to be, but I expect it to be somewhere around € 80.

Again, thanks to Steve Rush and Douglas Laing for the samples and the tasting!

I'm very interested in booze, with a focus on whisky. I like to listen to loads of music and play lots of Magic: the Gathering, and board games too. I'm married to Anneke, have two daughters Ot and Cato, a son Moos and a cat called Kikker (which means Frog, in Dutch). I live in Krommenie, The Netherlands.
View all posts by Sjoerd de Haan-Kramer →
This entry was posted in Glen Ord and tagged Douglas Laing, Glen Ord, Highlands, Inverness, Old Particular, Steve Rush, The Whisky Wire, Twitter Tasting. Bookmark the permalink.