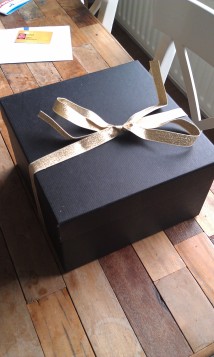 As you probably have seen on the interwebz since last week, is that Bowmore sent out lovely packages of Bowmore Small Batch and Darkest, both with a piece of custom made chocolate to go with the whisky. As if that was not enough, there also was a massive chocolate egg with buttons inside.

Of course the egg was crushed after it sea voyage, but that didn’t bother me in the least. It just made me eat chocolate three seconds earlier since I didn’t have to break it to bits first.

The chocolate is made by artisanal chocolate makers Montezuma, based in Sussex

Bowmore Small Batch, 40%
The recently released Bowmore Small Batch is an entry level whisky, just off the beaten path from the Legend, 12, what have you. It’s only matured in first and second fill bourbon casks. As any entry level special release from the current decade it doesn’t have an age statement. Although that usually sets off my alarm bells, or at least makes me a little bit scared of what’s going to come, I’m always willing to give it a go. Why am I scared of these NAS releases? The cheaper ones are usually not that good. And expensive for what you’re getting. 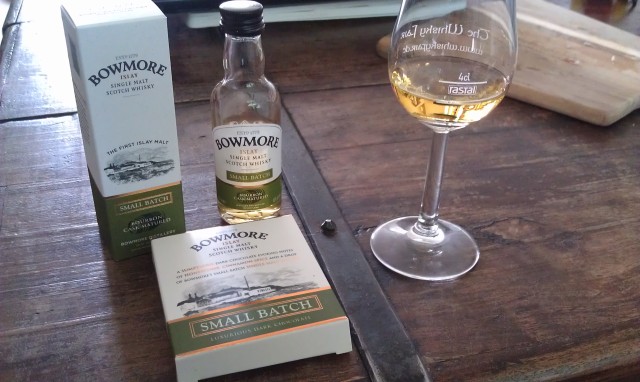 On the nose it’s rather salty with hints of vanilla and oak. Rather youthful but very good at that. A tad green and grassy, hay like and almost no smoke. I guess this whisky is very lightly peated. Lighter than usual.

The palate is smooth, with caramel and vanilla. Some Scottish tablet, slightly drying after a few seconds of swimming but still very easily drinkable. The finish has some coarse smoke at first, but turns sweet and salty too. It’s not very long.

A rather tasty whisky and very good for the € 40 or so you pay for it. The typical Bowmore flavours of the light Islay-ness are all present. Slightly sweet, floral and salty are all present. Very well done!

The chocolate, infused with the whisky and filled with honeycomb and caramel, is incredibly delicious. I do find that the whisky is overpowered by it and mostly heightens the dryness in the whisky. Both are lovely, but the chocolate is too intense for the whisky. 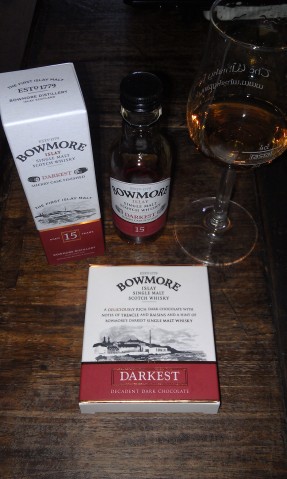 The Darkest is far from a new kid on the block. It’s been around for a couple of design overhauls and has been a crowd pleaser ever since I’ve come to hear of it. It’s lovely and thick with sherry, and so well received they’ve started releasing a cask strength version of it, under the Laimrig flag.

On the nose it’s light Bowmore-y with orange like sherry. A very fresh oloroso styled whisky, I think (I barely know about sherry). It’s very fruity, with golden syrup and light smoke.

The palate is more salty and smoky. A bit of brine actually, but with fruit. Raisins, orange and gentle oak. The finish is freshly sweet, blood orange even, mandarin. A hint of smoke and peppermint.

The chocolate has, as described, flavours of raisin and treacle. As you might expect, that works very well with the booze and the combination lift both parts to a higher level. Something about the whole being greater than the sum of its parts. Which is great.

What is even greater is that you get the chocolate bar for free if you order a bottle of Bowmore Darkest at TWE. Like you needed another excuse.

The Bowmore Darkest costs £ 48.95, including choclate.

Both samples and chocolate provided by Bowmore. Thanks a million! Loved every bit of it.

I'm very interested in booze, with a focus on whisky. I like to listen to loads of music and play lots of Magic: the Gathering, and board games too. I'm married to Anneke, have two daughters Ot and Cato, a son Moos and a cat called Kikker (which means Frog, in Dutch). I live in Krommenie, The Netherlands.
View all posts by Sjoerd de Haan-Kramer →
This entry was posted in Bowmore and tagged Bowmore, Chocolate, Darkest, Islay, Montezuma, NAS, Sherry Cask, Small Batch. Bookmark the permalink.