I almost wrote Four Roses, but that would be rather misleading. Especially for a post like this. Probably the most Serge Valentin-esque post I’m ever going to do with four rather different whiskies from one distillery.

I was not able to go to the Lowlands Whisky tasting in Den Bosch, at De Whiskykoning, a while ago since the trains weren’t going. Some maintenance on the tracks just before Den Bosch. Of course, the Dutch Railways had made buses available to do the last 10 miles or so, but that would increase my travelling time to about 2.5 to 3 hours, one way.

Rob, who owns/runs De Whiskykoning, saved me some samples from all three of his Lowlands tastings. He had 5 whiskies in each tasting from recent releases, and a Rosebank from his private collection. So, when I got there last week for the Irish Whiskey Tasting, he gave me three small vials of liquid gold with a note attached.

The first thing that hits you is a blast from the past. This stuff tasted so old fashioned and has an almost Brora like farminess, without the peat of course. Lots of straw, dried flowers and very earthy. Old straw flooring mats with lots of dirt trodden into them. But also some dates and dried tropical fruits. Stunning stuff on the nose alone!

The palate continues in the same manner. Initially a bit thin (hey, it’s 40%, right) but builds up nicely. It always stays gentle but goes towards the farmy flavours expected from the nose but with a bit of a sherry influence. Lots of fresh and dried fruits, all tropical. Straw, earth, oak and sweetness.

The finish is a bit on the sweet side, pretty heavy even. It’s lasting pretty long with some nice fruitiness.

This is an absolutely epic dram. Maybe even the best Rosebank I have tasted so far. The flavours and scents are gorgeous, even at 40%. I wonder what kind of beast this would have been at Rosebank’s typical Cask Strength of about 60… Stunning, stunning stuff.

Another oldie from a rather hard to get range of bottlings. Actually, I had never heard of the 150th anniversary bottlings from Cadenhead until this one popped up.

On the nose it has quite a bit more oak and is a lot drier (the ABV is already kicking in). Some sherry, and rather sharp. The alcohol is not as big as I expected it to be, nicely masked in flavours. Plums and cherries and dusty white pepper.

The palate is dry, strong and sharp. Lots of sherry and lots of fruit. Fruitcake with some serious booze kick in it. Some sweetness with a light spiciness to round it off. The finish is suddenly rather bready, with slightly burnt crusts. Rye bread, but also barley. Very long, woody but not very gentle.

Another stunner, that’s for sure. It doesn’t have the wow-factor on the same level as the previous one, but it still probably makes my top 5 Rosebanks ever. The sherry is not overpowering the whisky and gives it room to shine and add it’s raw power and dryness.

One I have already tried on more than one occasion, but a dram that I really love. I tried this for the first time when I was in my ‘older is better’ days and was surprised to find I prefer this one to the 22 year old from the same year and range. Even to the 25 year old from the Premium Releases in 2008 or 2009.

On the nose it’s quite different and more or less skips the fruity stuff going on in the previous two. It’s mostly alcohol, oak and malted barley. I really have the feeling to be at a distillery with these scents. The nose is already launching an attack on the nose, with quite some peppery heat. There is some dried apple and apple blossom in there.

The palate is sharp, with alcohol and straw, dried grass and a touch of pepper. There is a hint of vanilla but that’s in the distance. After a while it becomes more syrupy and sweet. The finish is rather dry but mellows quickly. Dried apples and pears again.

Very different from the first two, and a notch below them as well. Still a stunning dram though! I regret it more and more that Diageo closed the place down in the 90s. However you put it, Glenkinchie is just not on the same page as Rosebank. Same sport, different league. 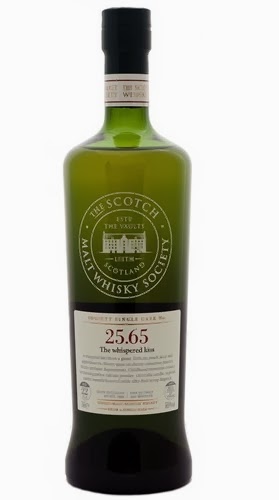 A surprisingly low strength Rosebank for a cask strength bottling. There’s no info on cask use except it’s from a refill ex-bourbon cask. Why they call it refill and ex-bourbon is beyond me, since refill automatically means that it’s no longer a bourbon cask but it contains whisky. So, the ex part can be left off.

Anyway, a bunch of internet people and I shared this after the bottle-share initiative took that direction. A couple of booze-buddies from the UK invited me to their new Google Group and we shared quite a few drams by now (remember that Karuizawa?). A good initiative, but one that’s costing me bigger bucks than I would like!

On the nose the thing that stands out is that this is a much more modern whisky. The cask influence is huge and I am hit by wave after wave of vanilla and icing sugar. Freshy shaved oak too, but even that is trumped by the vanilla and the incredible sweetness. Lots and lots of American oak, and because of that a rather nondescript nose.

The palate doesn’t fare much better but does add a bit of a white pepper spiciness. Some cinnamon too, simple syrup and artificial vanilla flavouring. The finish continues on but adds a hint of tinned pineapple.

For no real reason I had high hopes for this last one since that is a somewhat more obtainable bottle. Not that I wanted one, but I wanted proof that modern day whisky can be as good as older stuff. I know it can, but I hoped this one would confirm that.

Anyway, I don’t really like it. The flavours are nice and all, but it could be any whisky distillery doing a gentle whisky and then blasting it with an overactive heavy-on-the-vanillins cask. I’ve said it before when we had a couple in a row during 2012’s Blind Tasting Competition: It all tasted nice but I won’t be spending money on it.

So, the conclusion is to still taste before you buy, but also that I should have bought a lot more Rosebank when it was still available. Only a couple of bottles in my collection, of which two are closed. They will remain that way for a while. Saving something for later!

And, a million thanks to Rob at De Whiskykoning for being ridiculously generous with these samples!

I'm very interested in booze, with a focus on whisky. I like to listen to loads of music and play lots of Magic: the Gathering, and board games too. I'm married to Anneke, have two daughters Ot and Cato, a son Moos and a cat called Kikker (which means Frog, in Dutch). I live in Krommenie, The Netherlands.
View all posts by Sjoerd de Haan-Kramer →
This entry was posted in Rosebank and tagged Cadenhead, Closed Distillery, Den Bosch, Diageo, Falkirk, Gordon & MacPhail, Lowlands, Rare Malt, Rare Malts, Rosebank, Scotch Malt Whisky Society, SMWS, Whiskykoning. Bookmark the permalink.

4 Responses to 4 Rosebanks in a row