Rosebank has a tendency to be ridiculously strong, even at higher ages. I know this is partially due to the triple distillation, but also the fill level must have been ridiculously high to be at 61.4% after 25 years.

The angel’s share cannot have been the regular 2% either, because if you calculate that, you’d get at an ABV of around and about 100%. That seems rather unlikely, so my guess is that this must have been a bunch of ridiculously tight-grained bourbon casks.

Anyway, the distillery is one of those gems that have closed in the last century. This one wasn’t a victim of the 1983-1985 closures, since it closed in 1993 and was demolished in 2002. A lot of the distilleries that closed at some point were not really good at outputting great whisky all the time.

Port Ellen has its great ones, but also a lot of mediocre booze. Brora might be the exception to the rule since almost all of them are at least very good (Except a ‘dark sherry’ finished one from Chieftain’s, that was ruined by the finish). Rosebank also has its fair share of great bottlings, but a lot of the younger stuff that came out in the early years of this century proves they lost track along the way. There are a lot of really boring, watered down bottles too. So, don’t go blind on some distillery’s reputation. You’ll always hear people raving about the great ones, but not so much about the crappy stuff. 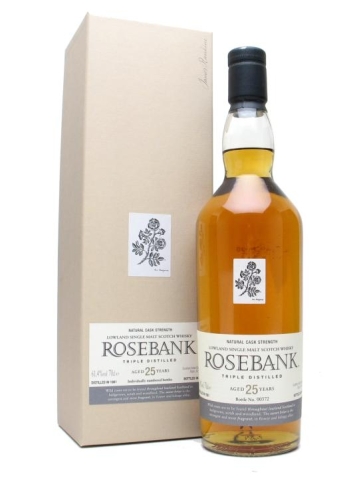 Sniff:
It’s dry and grassy at first, with a massive blast of alcohol. You’ll have to let your nostrils get used to that carefully. It’s quite flowery, but light. It’s not as heavy as the scent of roses for example. There’s also some vanilla behind the alcohol and a scent of shortbread.

Sip:
The palate is sharp and dry, but it’s not as sharp as you’d expect from over 60%. There are flavors of straw and white pepper. Vanilla and oak, with barley. Not just the grain, but the entire ears. A flower meadow but not heathery. Some spices, but I’m not entirely sure which ones. Maybe some curry spices and ginger.

Swallow:
The finish, compared to the palate and the nose, is remarkably gentle. It’s warming, and you know it’s a strong dram, but not scorching as you might expect. There’s vanilla again, but not too much of it. There’s barley, shortbread and coconut biscuits.

While the palate is comparable to the not-so-good 22 year old I tried a little while ago, and this isn’t even that much more complex, it is a lot better. Actually, this is a bloody good whisky. The flavours are well balanced and the added alcohol gives it a bit more depth and room to play with it. I didn’t even try it with water while writing this review (I never do and don’t want to add more variables, but maybe I should start with it…).

Anyway, great whisky, but it has gotten ridiculously expensive. It started at some £ 125 when it came out, which happened to be approximately € 125. By now it’s gone up to £ 550 in a best case scenario. I bought it around € 200 and it was worth every penny.

Yesterday I said something about finding excuses to buy whisky. This was one too. I thought the inauguration of my new whisky room/office was reason enough to indulge. I hadn’t bought anything for a little while so I could indulge a bit more than I would normally. I don’t regret it one bit, because this is cracking stuff.

I'm very interested in booze, with a focus on whisky. I like to listen to loads of music and play lots of Magic: the Gathering, and board games too. I'm married to Anneke, have two daughters Ot and Cato, a son Moos and a cat called Kikker (which means Frog, in Dutch). I live in Krommenie, The Netherlands.
View all posts by Sjoerd de Haan-Kramer →
This entry was posted in Rosebank and tagged Falkirk, Lowlands, Rosebank, Samples available, Triple Distilled. Bookmark the permalink.