The Islay tasting is one of the four seasonal tastings at De Whiskykoning. Officially it’s called the Winter Tasting. The other three are obviously Spring, Summer and Autumn. In that order the themes are Lowlands, Speyside and finally Highlands (and Campbeltown).

In 2014 the Lowlands tasting was probably held for the last time since there is so little interesting whisky coming from that region that it became increasingly hard to find six different whiskies to fill an evening with. Last year, as a fail safe, a couple of stunning Rosebanks were brought down from ‘The Whisky King’s’ own collection.

Anyway, what was different to all previous Islay tastings was that I fully booked it instead of there being random strangers too. A couple colleagues, some long time friends and some in-laws quickly filled up the limited amount of seats. Apparently it was a success since everybody asked me to make it an annually returning event, which I already did of course.

The line-up was epic as always, with a thorough focus on 2014’s Feis Ile. 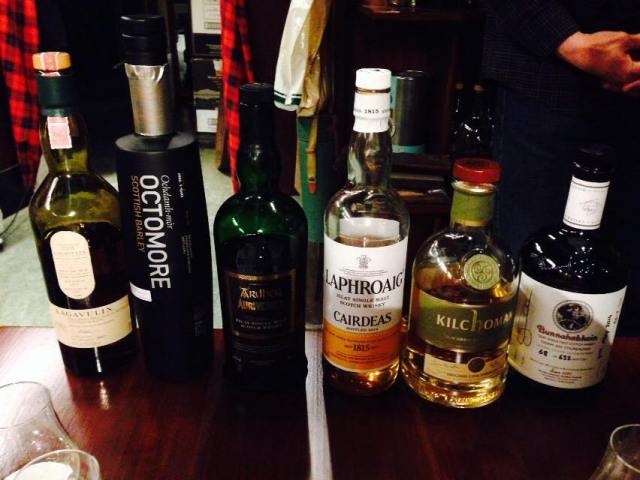 We tasted from right to left.

The idea of putting the Lagavulin after the Octomore was to thoroughly rinse our mouths, have half an hour to get the flavors out and then try the Lagavulin. Just because it’s epic. It worked. The room went quiet.

The Bunnhabhain from Marsala casks was a sweet start to the evening. This Feis Ile bottling was gentle, with a sweet, fruity and ashy undertone on the nose. The palate was slightly more salty and sharp. It also had the typical nuttiness from Bunnahabhain, which was only amplified by the Marsala wine. The finish was long, sweet and fruity. The nuts and ash were here too.

It developed nicely in the glass, but as with such casks (Marsala that is) I am always a bit scared that I will lose interest quickly. Good stuff, though.

The Kilchoman might have been put too early in the line-up. It was an interesting dram though. It needed some air since at first it smelled kind of bad, with lots of vegetables and porridge. It got better after a couple of minutes with grass and heather, sea weed, tobacco and a light smokiness. The palate was crisp, smoky and sweet in a sugary way. It was also salty and slight bitter. The finish went in a licorice root direction with a chalky note.

Again, good stuff, but as with many (all?) Kilchomans, I just can’t bring myself to spend 90 bucks on a 4 or 5 year old whisky.

This one I was a bit scared of. Laphroaig wasn’t received all those well round Feis Ile with a slew of bottlings that I couldn’t tell apart (read: I just didn’t remember). This one is typical Laphroaig goodness though. Crisp and smoky with lots of lemon, curd and lemongrass. Some oak too, and on the palate it’s smooth at first but builds quickly. Light smoke and oak. The finish is dry and sharp with oak. Not too long though.

A fairly simple and straight forward dram, but one I absolutely loved. For me Laphroaig is smoke and lemon. I love that combination.

This one I tried to buy last summer, but my finances were a bit of a shambles, so I didn’t. I thought I was okay with that since a lot of the Ardbeg Day bottlings I wasn’t too fond of. Now I know different.

This one was different to all of the above. More smoky and heady, warming and far more wintry. Heather, grass, chalk and oak. With lots of soft oaky notes. The palate was licorice and vanilla, espresso, straw and heather. The finish quite similar.

Even though I generally proclaim I’m not that big of an Ardbeg fan, this one is awesome. I should keep that in mind next spring.

The Octomore then. Another unpredictable whisky in combination with my palate. I tried great ones, I tried totally uninteresting ones. This one holds the middle ground.

The nose had hobby glue and vanilla, but also rubber bands and a slight (!) smokiness. Not too heavy. The palate was sharp and dry with vanilla and actual flavor. This doesn’t always happen with these levels of peat. The sweetness of the alcohol shone through, but not in a bad way. The finish still didn’t have much smokiness, but there is a mountain of earthy peat in it.

I liked this one on a superficial level. I don’t I’d go through a bottle of this quickly. 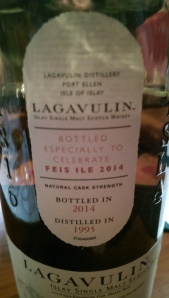 Then this. The Lagavulin for Feis Ile 2014. I didn’t even take notes on this one. It’s beyond great. It’s really an epic whisky and flavorwise it goes in the direction of the old Lagavulin 21, albeit a bit more gentle.

I put this in my notebook:

What I remember it is being sweet and lightly salty, with a sherry quality that I would describe as Manzanilla before I’d go to PX or Oloroso. The gentle, it shows lots of depth. There’s oak, tea, sea weed, thick smoke and quite some sherry. It’s awesome.

After the tasting the guys went on a spending spree and I saw most of us leaving with a bad of bottles. I picked up some things that were on my wish list for a while, and I got my slightly early birthday gifts from the in-laws in the form of a Bruichladdich 19yo, from 1986 and bottled by Blackadder. I had some drams of that before, some years ago, and I remember it being kick-ass.

I'm very interested in booze, with a focus on whisky. I like to listen to loads of music and play lots of Magic: the Gathering, and board games too. I'm married to Anneke, have two daughters Ot and Cato, a son Moos and a cat called Kikker (which means Frog, in Dutch). I live in Krommenie, The Netherlands.
View all posts by Sjoerd de Haan-Kramer →
This entry was posted in Ardbeg, Bruichladdich, Bunnahabhain, Kilchoman, Lagavulin, Laphroaig, Octomore and tagged Ardbeg, Ardbeg Day, Auriverdes, Bruichladdich, Bunnahabhain, Cairdeas, De Whiskykoning, Den Bosch, Feis Ile, Islay, Kilchoman, Lagavulin, Laphroaig, Octomore, Whisky tasting, Winter Tasting. Bookmark the permalink.

4 Responses to The annual Islay tasting at De Whiskykoning